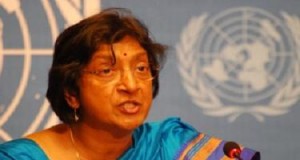 The 16-page report to be submitted to the U.N. Human Rights Council harshly criticizes the Sri Lankan government for slow movement in the area of justice in the report.

It states Tamils are still remaining in displaced persons camps after 2009 and there has been little investigation into accusations of serious human right violations. However, the Sri Lankan government has made good progress in rebuilding infrastructure and resettling those displaced by the 2004 tsunami states the report.

Pillayâ€™s report further states the government has committed only selectively to the recommendations of the Lessons Learned and Reconciliation Commission (LLRC).

“The steps taken by the government to investigate allegations of serious violations of human rights further have also been inconclusive, and lack the independence and impartiality required to inspire confidence,” the report said.