Ahmed Jabari probably didn’t even hear the missile that killed him, launched from a drone in the skies over Gaza City as he drove in an ordinary saloon car through a quiet residential street. 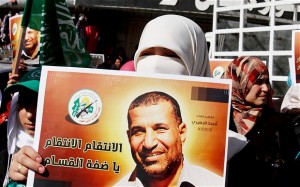 It was a remarkably successful operation even for Israel’s security forces, who pride themselves on their skill at despatching their enemies. Grainy black and white footage taken from a drone showed a minibus full of passengers drive past the target’s car to a safe distance, seconds before the missile exploded. A piece of chassis is seen spinning into the air, as the vehicle, in flames, continues drunkenly for a few yards.

Unlike targeted killings in the past, there was no collateral damage except for some minor injuries from flying glass. Israel has learnt the hard way that accidentally killing civilians carries a damaging political cost.

“In practical terms, it was a brilliant operation,” said Uri Dromi, a Colonel in the Israeli airforce. “When a decision is taken to launch an operation there is a bank of targets, usually about ten. Then it’s a question of opportunity.”

Locating the enemy is the hardest part. “There is no way you can track a target electronically. You must have human intelligence,” Colonel Dromi said.

By the time Jabari died on Wednesday afternoon he had survived four assassination attempts â€“ including one in 2004 that killed his brother, one of his sons and several male relatives.

He had directed dozens of terrorist strikes including suicide bombings, and masterminded the ruthless military takeover of Gaza from Fatah, its more moderate political rival. He had risen to command the military wing in Gaza of Hamas, the Palestinian “resistance” which is sworn to the destruction of the Jewish state, after he was released from a 13-year sentence in an Israeli jail, where he became radicalised.

His killing in Israel’s first “targeted assassination” since 2009 was a devastating blow against Hamas, and perhaps the beginning of Israel’s eighth war.

Somebody in the Israel Defence Forces press office quickly posted a triumphant Twitter message showing his picture with the word “Eliminated” stamped across it, even as Israeli warplanes began hundreds of strikes on Hamas targets.

His funeral, less than 24 hours after his death, was emotional and angry. Supporters called for revenge, demanded more rocket attacks, and shot into the air in defiance. But the usual masked gunmen stayed away fearing Israeli attack, and a sense of fear took hold among Hamas supporters: Israel had tracked down and killed one of its wiliest enemies in the heart of his stronghold.

Jabari took security so seriously that few ordinary Palestinians in Gaza had ever seen him on their crowded streets, although everybody knew his name. Many regarded him as a hero. He had stayed one step ahead of his Israeli enemies for years, moving house constantly and hardly ever showing himself in public.

Yet he was killed at a time of great tension, when Hamas leaders usually hide themselves for fear of Israeli attack. There had been several days of skirmishing along Gaza’s borders, with rocket attacks from Gaza and sporadic Israeli airstrikes.

It was obvious to everyone that a crisis was brewing, and Israeli politicians had warned just hours earlier that they were about to launch an operation â€“ although Hamas leaders seem to have mistakenly thought they had arranged a ceasefire. They cockily brushed aside Israeli threats. It was fatal overconfidence.

“He thought he was immune,” said Amos Harel, Military Correspondent with the Israeli newspaper Ha’aretz. “In particular because he had close ties with the new Egyptian government. And until Monday at least, Hamas thought it was calling the shots.”

There may have been another reason; some Israeli observers believe Jabari may have thought Israel wanted to keep him alive because, if they killed him, more radical Palestinians would step forward to replace him.

He may also have thought he was safe on his home turf in Gaza, the tiny enclave that is run by Hamas. But Israel’s stunning success in the first few days of Operation Pillar of Cloud has shown the effectiveness of its network of informers, and set off waves of paranoia in Hamas’s ranks.

On Friday afternoon they made a very public and bloody show of what “collaborators” can expect, executing a man who they said had guided in Israeli strikes.

The victim, named as Ashraf Ouaida, was taken from prison and bundled out of a van by gunmen on a busy street, made to kneel on the pavement and shot repeatedly in the head as shoppers and pedestrians looked on. His corpse was left lying in a pool of blood, covered with a message written in Arabic.

“The Ezzedine al-Qassam Brigades announces the slaughter of the collaborator… who participated in the assassination of more than 15 of the leaders of the Palestinian people,” it said. Sources in Gaza said he was not accused of betraying Jabari.

Israeli officials were keen to stress how important Jabari was â€“ one even described him as the bin Laden of Hamas. Lieut Col Avital Leibovitch, the military spokeswoman, said he had “a lot of blood on his hands”.

However the politicians, with one eye perhaps on the high stakes if everything goes wrong in their latest Gaza operation – a massive gamble just weeks before the general election – have refrained from crowing too much.

Jabari, a father of 14 who was born in Gaza in 1960, became acting commander of the Hamas military wing in 2006 when his predecessor was seriously wounded in an Israeli attack.

As a senior commander he helped plan suicide bomb attacks that killed hundreds of civilians on Israel’s streets during the bloody second intifada from 2000 to 2005.

In 2007 he was in command when Gaza was wrestled from the control of more moderate Fatah forces â€“ his old comrades. He began his political career in their ranks before, like so many Palestinians, he became disillusioned with their corruption and ineffectiveness and left to join Hamas.

He was best known in Israel for appearing at the release of captured Israeli soldier Sgt Gilad Schalit a year ago, escorting the Israeli to the Rafah crossing with Egypt. The release â€“ in exchange for 1000 jailed prisoners, including more than 300 convicted killers â€“ was a triumph for Hamas, so important that for once Jabari made sure he appeared in the photograph, next to the dazed-looked prisoner of war.

Afterwards he told an Arab journalist that the released prisoners were responsible for the deaths of 569 Israelis. But he was said to have tried to restrain radicals who wanted to fire rockets at Israel, and he may have been a moderating force in the last years of his life. Israeli peace campaigner Gershon Baskin said he was: “In line to die, not an angel and not a righteous man of peace.”

The release of Sgt Gilad was to be the high point of Jabari’s success. Israel’s war chieftains were among those watching his moment of triumph. Israeli sources insisted that his assassination last week was a careful calculation, not personal and not revenge.

But just over a year later, when it was time to order another targeted assassination, it was Jabari’s name that was at the top of the list. (The Telegraph).