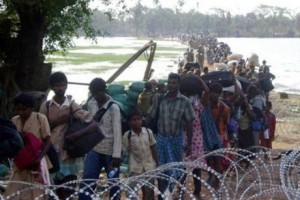 The UN failed to protect civilians during Sri Lankaâ€™s armed conflict according its own report, released today, prompting Amnesty International to renew its call for an independent investigation into alleged war crimes by the Sri Lankan army and the Tamil Tigers (LTTE).

The Report of the UN Secretary-Generalâ€™s Internal Review Panel on United Nations Action in Sri Lanka, submitted to Ban Ki-moon and made public today, offers a strong indictment of the UNâ€™s response to Sri Lankaâ€™s armed conflict. It deals with a period of conflict in Sri Lanka when very grave violations of international law are alleged and where effective UN action might have averted some of the worst of the violations.

Instead the text describes a scenario where UN officials repeatedly failed civilians they were entrusted protect, while ignoring or downplaying mounting evidence of war crimes compiled by their own staff as they struggled to appease Sri Lankan authorities intent on restricting humanitarian space.

â€œUnfortunately this report confirms the many troubling allegation of UN failings we have heard since the May 2009 end of the conflictâ€, said JosÃ© Luis DÃ­az, Head of Amnesty International’s UN New York office.

â€œWe hope that the reportâ€™s strong findings will help improve the way the UN and the international community protect civilians in times of conflict and reform errant relief systems.â€

The report should also help to refocus international attention on the very grave problem of impunity in Sri Lanka.

Tens of thousands of Sri Lankan civilians may have been killed through the indiscriminate actions of combatants.

Allegations that war crimes were committed by both the Sri Lankan armed forces and by the Tamil Tigers (LTTE) have been deemed credible by UN SG Ban Ki-moon’s Panel of Experts on Accountability in Sri Lanka, which recommended an independent international investigation.
The Internal Review describes vividly the conditions faced by civilians and UN workers.

It details how they were trapped in the conflict region where both sides attacked civilians, but the UN suppressed information about humanitarian law violations, particularly those committed by the Sri Lankan forces.

â€œThis report is also a wake-up call for UN member states that have not pushed hard enough for an independent international investigation into alleged war crimes committed by both Sri Lankan forces and the LTTE in the last phase of the war. The report clearly illustrates the Sri Lankan governmentâ€™s lack of will to protect civilians or account for very serious violations. There is no evidence that has changed,â€ said DÃ­az.
Testimony of survivors collected by Amnesty International alleges that both sides knowingly killed and endangered civilians, and contains details about enforced disappearances of surrendered combatants by the Sri Lankan army.

Eyewitnesses say that the LTTE used civilians as human shields against the approaching army, and shot civilians who tried to escape. As its forces were depleted, it intensified conscription of child soldiers.

The Sri Lankan government declared a â€œNo Fire Zoneâ€ and directed civilians caught in the conflict to relocate there. Witnesses say the army shelled the â€œNo Fire Zoneâ€, which both the Sri Lankan army and political leadership knew was densely populated by civilians.
They hit hospitals, killing and injuring patients and staff.

More than three years later, there has been no impartial investigation into these alleged crimes under international law and no one has been brought to justice.

This failure sets a dangerous precedent, sending the message that states which, like Sri Lanka, have not ratified the Rome Statute are beyond the reach of international justice and that crimes committed in the name of â€œcombating terrorismâ€ can simply be ignored. 14 November 2012