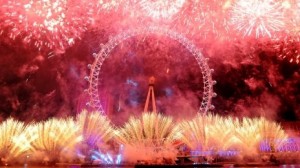 Crowds across the UK have risked the damp weather to see in 2013 at New Year’s Eve events.

Hundreds of thousands of people lined the Thames in London to watch the fireworks display. Tens of thousands of people descended on the streets of Edinburgh for the world-famous Hogmanay celebrations. A spectacular fireworks display in Northern Ireland marked the start of the Derry-Londonderry 2013 City of Culture year. Earlier downpours dried up over much of the country in time for the celebrations – although rain continued in Scotland, Northern Ireland and eastern England. Overnight, much of central London is closed to traffic, but the Tube will run all night and most public transport will be free until 04:30 GMT. Mayor Boris Johnson said the fireworks would round off a year that “glimmered with excitement and enthusiasm”. In Edinburgh, Scottish rock band Simple Minds headlined the Concert in the Gardens, where they were joined by The View and Bwani Junction against the backdrop of Edinburgh Castle. (BBC)]]>