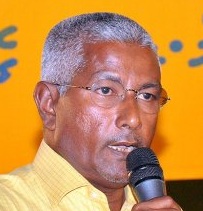 The then Senior Under-Secretary of the Foreign Ministry Ibrahim Hussain Zaki on Thursday has said that he had seen the Sri Lankan People’s Liberation Organisation of Tamil Eelam (PLOTE) leader Uma Maheswaran three months before the November 3, 1988 insurgent attack on the Maldives by the group, Haveeru reports.

At a press conference organized by him at the Male City Hall to reveal his “final say” over the attack, he said that he saw Uma Maheswaran inside a room he stayed in Sri Lanka.
“But at the time I didn’t know who he was. I just knew that Uma Maheswaran is the leader of PLOTE and I hear that he is in the same league as Prabhakaran [LTTE leader]. However I had no idea how he even looked like,” Zaki said.
He said that he only knew that it was Uma Maheswaran that he saw from his room after a few days, when he saw Maheswaran lying dead near the Maldivian High commission in Sri Lanka. Uma Maheswaran was killed in early 1989.
“When I saw him lying dead, I quickly recalled that it was him who I had seen in my room earlier,” Zaki said.
Zaki mentioned of his encounter with Uma Maheswaran in response to a question by a reporter. However he did not mention why he had met the PLOTE leader. He refused to divulge further details by alleging that it may trigger an inquiry and could see him face charges.
This is the first time that someone other than those involved in the November 3, 1988 insurgent attacks had admitted to having met Uma Maheswaran.
Zaki said that he had not been aware of the November 3, 1988 attack beforehand. He added that he would voluntarily go to prison if proven otherwise.
“I swear by Allah that I was not aware of it [the attack] before it had happened. If anyone can prove it [involvement], I will salute that person. And I shall voluntarily go to jail,” Zaki said.