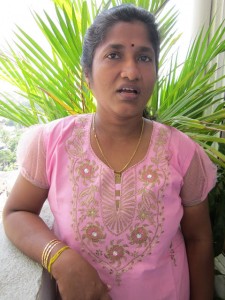 Mothers, wives and sisters of several LTTE surrendees are demanding that they be reunited with their family members, four years after the war.

War came to an end in May 2009, but that did not put an end to the suffering of the communities. Even today, numerous Tamil families await justice for their families and friends in Sri Lanka. This tale is similar but also different. Different because it highlights the plight of women â€“ mothers, wives and sisters â€“ who are waiting for the men in their families to return home, post war. That story is so common to many thousands here. But it is different because these women are refusing to accept the loss of their dear ones as mere â€˜collateral damageâ€™ or â€˜naturalâ€™ during war conditions.

These are men who were associated with the Liberation Tigers of Tamil Eelam (LTTE) and surrendered during the final battle to the security forces, in a final bid to save their lives. Given to them was a firm undertaking that their lives, along with their families, would be safe.

For the women who have been waiting to be united with their family members after their surrender, it is not merely a matter of emotion but of justice. It is a right at least two women in this group have sought to have enforced through the arm of law.

Uppermost in the minds of these women is the absence of justice after their family members voluntarily surrendered to the security forces. They demand justice â€“ and the return of the male members of their families. Despite all odds, they firmly believe they have a cause and are now in active pursuit of justice.

According to these women, their family members had surrendered to the military in May 2009, both during and at the end of the war. These women also claim to have actually witnessed the respective surrenders, during those final days of war.

Since then, the relatives have continued to search for their missing kith and kin and are now despairing, as it daily dawns on them that these surrendees are not likely to return home, no matter how much they hope that they would.

The Paris-based former LTTE international spokesperson who later became the Project Coordinator of the Tamil Rehabilitation Organization(TRO) in Vanni, Lawrence Thilagar, Tiger Political Wing Deputy Leader, Thangan alias Sutha Master, LTTE Administrative Wing Head, Poovarangan and Jaffna Political Wing Leader, Ilamparithy, were among a group of senior Tiger commanders who were last seen surrendering to the security forces in the Vanni region on 18 May 2009, accompanied by a Catholic priest, Rev. Fr. Francis Joseph â€“ never to be heard of or from â€“ again.

â€œMy son Vijayapaskaran (32) surrendered on 18 May 2009, in Vattuvaagal, along with many senior combatants, who were accompanied by a Catholic priest, Rev. Fr. Francis Joseph. I witnessed my sonâ€™s surrender as well as othersâ€™. The military took the surrendered combatants in a bus, and promised me, as I continued to stay there, that they will inform about their whereabouts, once they are taken to safety. In the past four years, I have visited all the detention centres in the country, but I did not find my son anywhere.

I have waited for far too long and I am getting old.Â  I want justice for my surrendee son before I die,â€ says an emotionally charged Pushpaambaal Thanabalasingham (53), a grieving mother from Kumuzhamunai, in the Mullaithivu District.

â€œMy son-in-law, Nadesu Muralitharan (37), served the LTTEâ€™s Intelligence Unit, until the end of the war. My daughter, Krishnakumari (30) and their children Saariyan (5) and Abitha (3) surrendered to the military together with Nadesu, on 18 May 2009. I visited all the detention centres and I could not find my family members. They surrendered along with several senior combatants of the LTTE, accompanied by Rev. Fr. Francis Joseph. The surrender took place in Vattuvaagal in the Mullaithivu District and I witnessed their collective surrender.

I have searched everywhere for my son-in-law, my daughter and my two grandchildren. Almost four years have gone by since the war ended, but I have not heard a single word about my family members after their surrender to the security forces in Mullaithivu. I have decided to file a writ of habeas corpus,â€ says a defiant Ponnamma Kanthasamy (60) from Kandavalai, in the Kilinochchi District.

Itâ€™s noteworthy that most of the mothers, sisters, wives and daughters witnessed their sons, brothers, husbands and fathers in the act of surrender to the security forces, thus rendering them eye witnesses to their surrenders, during the final phase of the war.

â€œMy husband Sinnaththurai Sasitharan (43), popularly known as Ezhilan, was the Political Wing Leader for Trincomalee District. He surrendered along with many senior combatants like him, accompanied by Rev. Fr. Francis Joseph.

â€œI still have reason to believe that the government is keeping my husband, possibly in some secret place. I need to know where he is and to have him released urgently as promised to the families of all surrendees,â€ asserts Ananthy Sasitharan (41).

These families of LTTE surrendees have waited for justice since May 2009. Nothing has happened to alter their collective fate of having to wait for their family members and some of these anxious women have now resorted to legal action. Family members of five such surrendees have recently filed writs of habeas corpus at the Vavuniya High Court.

â€œThe families of the surrendees are suffering without justice. These people were not taken into custody but were surrendees. As such, the government should be accountable for their safety and should be answerable. We believe, the State should not continue in this manner without ensuing justice,â€ adds Ananthy.

Meanwhile, there are many questions that remain unanswered relating to their safety and wellbeing.

â€œWhere are the combatants who surrendered to the armed forces in May 2009? Family members of the surrendees have a right to truth and to the safe return of these persons. What happened to them after their acts of surrender? The Lessons Learnt and Reconciliation Commission (LLRC) has made clear recommendations with regard to surrendees, which should be duly implemented.

That is mandatory for people to receive justice and for all of us to move ahead, towards reconciliation. The government was expected to create a centralized database containing the names of all detainees which should have been made available to the next of kin with their names, place of detention as well as the record of transfers, if any. Nearly four years have passed, but where is the list?â€ queries Rev. Fr. Emmanuel Sebamalai, Parish Priest of Thaazhvuppaadu in the Mannar District.

For the family members of surrendees, it is of extreme importance to know what happened to their loved ones. They need information and justice to move on, bringing closure to this dark and painful episode in their collective lives.

9.23 â€“ Launch a full investigation into allegations of disappearances after surrender/arrest and where such investigations produce evidence of any unlawful act on the part of individual members of the Army, to prosecute and punish the wrongdoers.

9.48 â€“ Direct the law enforcement authorities to take immediate steps to ensure that allegations (of abductions, enforced or involuntary disappearances and arbitrary detention) are properly investigated into and perpetrators to be brought to justice.

9.51 â€“ Appoint a special Commissioner of Investigation to investigate alleged disappearances and provide materials to the Attorney General to initiate criminal proceedings as appropriate and to provide the Office of the Commissioner with experienced investigators to collect and process information.

9.63 â€“ Create a centralized database containing a list of detainees, which should be made available to the next of kin with names, places of detention as well as the record of transfers.

Accordingly, (1) Publish a list of names of those in detention.

(2) Issue a certificate when a person is discharged, so that the same person is not taken into custody again, unless new evidence is discovered against him

(3)Look into the general issue of law delays to expedite prosecution or discharge detainees. courtesy: PassionParade