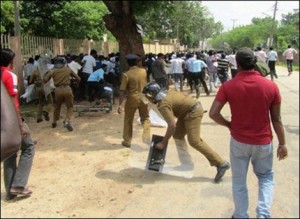 Although the President of Sri Lanka has repeatedly said that the country is on the right track of reform path, four Tamil student-activists were recently detained in North. It happened ahead of an intended commemoration ceremony of Tamils Heroes day. Concerning the recent arrests of students, Indian communist party yesterday called on the government of the Sri Lanka to immediately release students detained in military base. Party’s Tamil Nadu secretary T Pandiyan also urges the regime ensuring basic freedom of the citizens. The statement says students and civil society groups must have the freedom of assembly and freedom to exercise their democratic rights.]]>