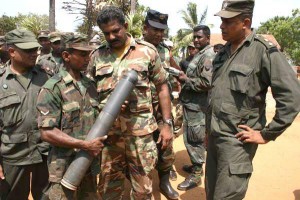 Amidst severe attack by Tamil parties over engagement with Sri Lanka, Government has called off the annual defence dialogue with that country scheduled to be held on March 25 (rpt) March 25.No reason was given for cancellation of the Secretary-level talks which were to be held here.

“The Annual Defence Dialogue with Sri Lanka has been called off,” a source told PTI, adding new dates have not been decided yet.

During the talks, the two sides were to discuss ways to strengthen defence ties and finalise future military exercises.

The decision has come at a time when Tamil Nadu parties are up in arms over India’s engagement with Sri Lanka.

Tamil parties, including key UPA ally DMK, has been criticising the government for holding training for Sri Lankan forces, which has subsequently been shifted from South to North India.

However, India has also maintained that it will not cease military ties with Sri Lanka and continue to provide training to its personnel in Indian military academies and institutions.

India had shifted the exercise between Special Forces of the two countries from Belgaum in Karnataka to Nahan in Himachal Pradesh.

Likewise, it had also instructed the Navy to hold war games with the Lankan Navy away from the waters of four South Indian states.

In the recent days, DMK has accused the government of being soft on alleged atrocities by Sri Lankan forces against ethnic Tamils and even threatened to withdraw support if India does not support a resolution against Sri Lanka at the UN Human Rights Council.

Emerging story. Watch this space for updates as more details come in