India’s Congress party is facing a political crisis as opposition parties organise a nationwide strike, and a key ally refuses to reverse a decision to withdraw crucial support.

Now leading a minority coalition in parliament, Congress needs to cobble together new alliances to see it through to elections in 2014. 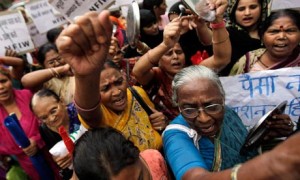 The crisis has been prompted by reforms ordered by the prime minister, Manmohan Singh, on Friday, which include a cut in fuel subsidies and a move to make it easier for foreign supermarket chains to invest in the £300bn retail sector.

Mamata Banerjee, the firebrand leader of the regional Trinamool Congress party which has pulled its support, said on Wednesday she would not reverse the decision until the reforms were cancelled.

Other coalition members and potential allies have yet to say if they will back the government. Some plan to join the strike, scheduled for Thursday.

Congress officials rejected claims the government would fall. Ambika Soni, the information and broadcasting minister, told reporters her party had all the support it needed.

“No other party wants an early election. They are all making noises and taking a bite at the bone but the government will survive,” said Mohan Guruswamy, of the Delhi-based Centre for Policy Alternatives.

Singh announced the long-awaited reforms, which economists have dubbed essential to boost flagging economic growth, after growing criticism at home and abroad of his failure to push through significant reforms.

A series of corruption scandals implicating officials from Congress or its allies has further damaged his reputation as a manager, although his personal integrity has not been questioned.

However, analysts have claimed the measures, though welcomed by the markets and the business community, do not go far enough. Ratings agencies have also remained unimpressed.

“It was a decision made to placate western criticism which has focused primarily on retail,” said Guruswamy. “But none of the really major changes that are necessary are even being contemplated. The impact of the cut in subsidies  is minimal given their overall cost.”

Congress strategists appear to have calculated that the political risk of low growth outweighs the potential problems caused by the withdrawal of allies such as Trinamool, which has blocked a series of reforms over the past 18 months.

Growth in India has sunk to a three-year low of under 6%. Inflation has remained stubbornly high, particularly in everyday items which make up the bulk of household expenses for the poor. (The Guardian)