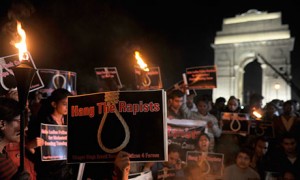 Indian authorities have charged five men with the kidnap, gang rape and murder of a woman in Delhi last month.

They say women across India are frequently subjected to harassment and sexual assault, that reports of crimes against women are not taken seriously and that conviction rates are too low.

The BBC’s Sanjoy Majumder in Delhi says this is far from the first such crime to make the news, but that is has touched a raw nerve with the public and could become a watershed case. On Wednesday, Delhi’s Chief Minister Sheila Dikshit joined thousands of women on a protest march through Delhi to Rajghat and called for stringent anti-rape laws. India’s Junior Education Minister Shashi Tharoor has suggested a new anti-rape law should be named after the victim. The woman’s family have said they would have no objection to such a move. The woman and a male friend had been to the cinema when they boarded a private bus home in the evening. Police have said the men on the bus had been drinking and were taking the vehicle on a joyride. They beat the woman and her companion with iron bars, raped her for nearly an hour and then threw them out of the moving bus into the street, say police. The Press Trust of India quoted police sources as saying the driver of the bus had tried to run her over after throwing her out, but that she was saved by her friend. She sustained serious injuries to her body and brain and died on 29 December in a hospital in Singapore, where she had been flown for specialist treatment. Delhi officials have responded to criticism that they are failing to protect women by announcing a series of measures intended to make the city safer. These include more police night patrols, checks on bus drivers and their assistants, and the banning of buses with tinted windows or curtains. The government has also set up a committee under a retired Supreme Court judge to recommend changes to the anti-rape law. A telephone helpline has been launched for women in distress, connected with police stations across the city. In what has been seen as an indication of the growing public anger about sexual violence, footage was broadcast on national television on Thursday showing an attack on a member of the ruling Congress party in north-eastern Assam state who had been accused of raping a young woman. The video showed a crowd of women surrounding the man, stripping him and hitting him before handing him over to police. (BBC) ]]>