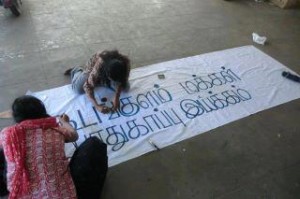 The front page of todayâ€™s Rajasthan Patrika has carried a news about tritium leak in Rajasthanâ€™s Rawatbhata Atomic Power Plant (RAPP) which the national media has conveniently overlooked. According to the news item, the accident happened 5 days back but the plant administration at RAPP kept it under wraps. On Saturday, 38 workers were exposed to tritium leaks while they were working on heavy water and tritium supply channels in the reactor. Vinod Kumar, the Station Director of RAPP Units 5 and 6 has been quoted as saying that 3 workers have been exposed to Tritium doses exceeding normal.

According to some unconfirmed sources, around 150 employees and daily workers were examined and kept under observation. An expert team from Mumbai has arrived there.

Speaking to DiaNuke.org, prominent nuclear physicist Dr. Surendra Gadekar said there is no â€œsafe doesâ€ of Tritium. It is a dangerous radionuclide of hydrogen, soluble in water and can reach in every corner of the body once somebody is exposed to it. It leads to disabilities and genetic mutation. Dr. Surendra Gadekar has done extensive health survey around the RAPP in the past and his studies have revealed high occurrence of physical disabilities and cancer, especially in children and women. He also expressed concern over the plight of contractual workers in the nuclear industry in India.

Contrary to the high-decibal official rhetoric, the Indian nuclear industry has a poor track-record on safety. In August last year, radioactive leak took place in Indiaâ€™s Kakrapar nuclear reactor leaving 3 workers severely sick due to radiation exposure, all employed on contractual basis without any health benefits or insurances. The officials in the power plant pressurised the workers for a month until their condition worsened and they complained to the district collector. Embarrassed when this incident was revealed, a senior official from the NPCIL said – â€œtaking advantage of it, the workers, who were on contract, began demanding regularisationâ€ !

Mr Kailash Chandra Purohit, who has taken over as the new CMD of the NPCIL this week, started his career at the Rawatbhata nuclear reactors. In a media interview today, Mr. Purohit has summed up his lesson from Koodankulam for other nuclear power projects- a massive â€œoutreach programâ€. Public relation is the best way to ensure nuclear safety !