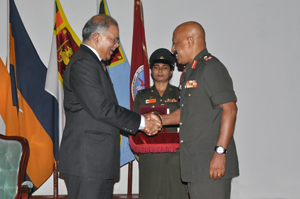 A prominent Sri Lankan MP wants India to change its Sri Lanka policy, warning that its hands off attitude was encouraging Colombo from meeting the legitimate political aspirations of the island’s Tamil minority. Suresh Premachandran also said in a telephonic interview that the government of President Mahinda Rajapaksa was not sincere in having a dialogue with the elected leaders of the Tamil community. “One could understand a certain Sri Lanka policy India followed when the LTTE (Liberation Tigers of Tamil Eelam) was there,” the Tamil National Alliance (TNA) member told IANS here. “Now that the LTTE is no more, India must change its (Sri Lanka) policy,” he said. “Otherwise the Sri Lankan government’s attitude will not change.” India solidly — both tacitly and openly — backed Colombo when the latter waged war on the LTTE, leading to its destruction in May 2009. Since then, however, the Rajapaksa government has gone back on some of the promises it made to Indian leaders on pursuing a path of reconciliation with the Tamil community. And Tamil leaders say that India is not putting enough pressure on Sri Lanka to implement what it told Prime Minister Manmohan Singh including on providing genuine autonomy to Tamil areas. According to Premachandran, Sri Lanka was emboldened vis-a-vis the democratic world because of the support it gets from China. “They (the regime) don’t care about the US and Europe, and they say they can manage India too,” said the MP, whose TNA is the main Tamil voice in parliament and which was earlier seen as the LTTE’s political arm. “They feel that with China with them, they can manage the UN too.” He accused the Rajapaksa government of militarizing Sri Lanka’s Tamil dominated north and allowing the security forces to have a stranglehold over the vast region where the Tigers once held sway. “The government says they are building infrastructure there but that only amounts to building roads and providing electricity to military camps. The Tamil villages don’t get any benefits. “Those who were with the LTTE are being re-arrested after release. There are military checkpoints everywhere. The government virtually wants to drive away the Tamil youths.  The entire Tamil population is suspect “When we say all this, people say the TNA is exaggerating. We are not.” According to Premachandran, Sri Lanka’s northern province was now like a Palestine – “an occupied territory”. Although the war against the Tamil Tigers ended in 2009, Sri Lanka still battles allegations of human rights abuses, some of it relating to the period when the government defeated the LTTE in a war that left thousands dead and maimed. Colombo routinely denies the charges. He said the numerous military camps in the northern province were being built with Chinese help. “China also provides heavy military and economic support (to Sri Lanka).” Premachandran said a TNA delegation would travel Jan 27 to South Africa, which is trying to bring together the Tamil leaders and the government to the negotiating table — a role once played by India. But he made it clear that South Africa was unlikely to succeed in its stated mission. “Personally, I fail to see how South Africa can achieve what it has set out to achieve,” he said. “We feel they (Colombo) are doing all this just to make the international community believe they are serious about resolving political issues. “The harsh reality is the Sri Lankan government is not sincere about talking to the Tamil representatives. They don’t want to talk to us. “They keep telling us to talk to the Parliamentary Select Committee (to resolve political issues). But this committee is dominated by Sinhalese parties, and they will never agree to anything we suggest. Frankly, the government is not serious about a dialogue.” (IANS)]]>