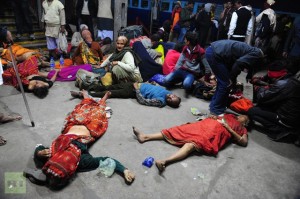 India’s ranking was brought down by militarisation, conflicts and corruption

India ranks low at 141in this year’s Global Peace Index (GPI) that measured peace in 162 countries, according to 22 qualitative and quantitative indicators of the absence and fear of violence.

The major indicators that bring down India’s ranking are militarisation, domestic and international conflicts, and corruption.

However, despite an increase in military expenditure, India made positive gains in its level of peace after reductions in deaths from internal conflict and the level of perceived criminality in society, according to the 7th edition of the annual GPI released on Tuesday.

In the South Asian region, Sri Lanka is one notch above India at rank four while Bhutan is the most peaceful country. It is followed by Nepal, Bangladesh, Sri Lanka, India, Pakistan and Afghanistan, in that order.

Globally, a dramatic rise in the number of homicides and 59 more countries increasing their military expenditure as a percentage of Gross Domestic Product were the key drivers in making the world a less peaceful place, according to the 2013 GPI.

This year’s findings underline a six-year trend showing a deterioration of five per cent in global peace. In this time, 110 countries have seen their score deteriorate while only 48 became more peaceful. The economic impact of this five per cent loss in peace came at a cost to the global economy of $473 billion last year.

The sharp increase in the number of homicides — up eight per cent over the last year — can be almost entirely attributed to Latin America and Sub-Saharan Africa with, for example, the homicide rate in Honduras further increasing by almost 10 per 100,000 people — becoming the highest in the world at 92 homicides per 100,000 people.

Steve Killelea, founder and Executive Chairman of the Institute for Economics and Peace (IEP), said: “The migration of populations to urban areas in developing countries has been a key driver in the rise of homicides worldwide. This has also led to an increase in violent crime. It is essential for the police to gain the trust of those living in city slums; to achieve this, addressing police corruption would be a first important step.”

The overall deterioration of the military spending indicator in the GPI is primarily due to a large number of low-middle income countries, typically authoritarian regimes like Iran, Iraq, Oman, Zimbabwe and Afghanistan, Cote d’Ivoire and Democratic Republic of the Congo having increased their expenditure to more than seven per cent of GDP.

In contrast, some slight improvements were evident over the last year on the indicators of the likelihood of violent demonstrations and the Political Terror Scale, a measure of State-sponsored terror, with improvements in countries such as Kenya, Kyrgyz Republic, Zambia, and Tunisia.

Syria’s descent into civil war recorded the greatest score deterioration in the history of the Index. Additionally, many Middle Eastern and North African countries continue to be affected by the fallout from the Arab Spring with violent demonstrations and further political instability.

The data also revealed evidence of countries being able to make significant gains in peace. Libya, for example, experienced the greatest rise in peace as its newly elected government and recovering institutions were established following the turmoil of the recent revolution and civil war. North Africa also had more to celebrate as Sudan and Chad experienced the second and third most substantial gains as their respective conflicts eased.

Europe remains the most peaceful region comprising 13 of the top 20 countries, including Iceland, which continues to rank first. However, several high debt countries including Spain, Greece, France and Portugal experienced less peaceful conditions amid challenging economic circumstances during the last year.

This also reflects the six-year trend data, which shows that countries that suffer from recession decrease in peace at a greater rate than the rest of the world.