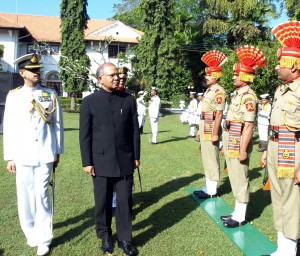 India is committed to being a partner of Sri Lanka in meeting its aspirations of peace, harmony and development, the High Commissioner of India to Sri Lanka Ashok K. Kantha said yesterday. He said this while speaking at the celebrations at India House in Colombo to mark the 64th Republic Day of India. He said that Sri Lanka and India have a very special relationship based both on shared heritage and shared interests. He noted that the last year witnessed dynamic developments in the strong, friendly and time-tested relations with Sri Lanka. Referring to recently held 8th meeting of the Joint Commission co-chaired by the Ministers of External Affairs of the two countries, he said that it took stock of the entire gamut of the relationship between both countries and they also agreed on many new initiatives. The High Commissioner underlined the strong commitment on both sides to take the relationship, renew and enlarge it continuously. The High Commissioner also underlined the growing economic ties between the two countries and that India was the leading source country in terms of foreign tourist arrivals and foreign direct investment into Sri Lanka. He referred to the decision to double bilateral trade to US$ 10 billion by 2015 and to move towards an enhanced framework for a special economic partnership. He also said that several new initiatives and projects are in the pipeline including the Sampur Power Plant, new manufacturing zones and exploration of feasibility of physical connectivity across the Palk Strait.]]>