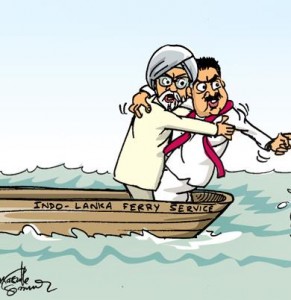 India has assured Sri Lanka of its support at both regional and international spheres emphasizing the need for the two countries to share common ground on issues affecting them.

Informed diplomatic sources reveal that the recently concluded meetings between President Mahinda Rajapaksa and Indian Premier Manmohan Singh has stressed the significance of adopting a common stand on issues both affecting the two countries individually as well as internationally.

It is believed that such an understanding would be reflected upon future international fora where Sri Lanka would come under scrutiny of certain global bodies, indicating what was termed a â€˜clear policy shiftâ€™ by the Indian government. Indiaâ€™s latest assurance comes after it voted in support of a US backed resolution on Sri Lanka at the UN Human Rights Council (UNHRC) sessions in Geneva in March.