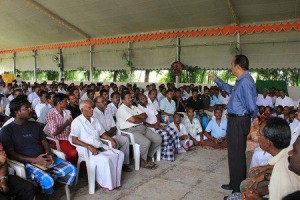 Rajapaksa, who landed at the Air Force Station, Palam, was received by Indian Minister of State for Parliamentary Affairs and Planning, Ashwani Kumar.

The Sri Lankan President is scheduled to meet his Indian counterpart on Thursday, followed by a meeting with Prime Minister Dr. Manmohan Singh at his 7 Race Course Road residence the same evening.

Rajapaksa will depart for Sanchi in Madhya Pradesh on Friday morning, where he will visit Sanchi Stupa and participate in the foundation laying ceremony of University of Buddhist and India Studies.

Rajapaksaâ€™s visit comes at the backdrop of staunch opposition from the Marumalarchi Dravida Munnetra Kazhagam (MDMK) general secretary Vaiko, who has criticised the Centre as well as BJP-led Madhya Pradesh government for inviting the Sri Lankan President to Sanchi.

â€œDespite knowing that Rajapaksa is solely responsible for the genocide of innocent Tamils in Sri Lanka, the Shivraj Singh Chouhan government in Madhya Pradesh has invited him, and the Centre endorsed his visit,â€ Vaiko, who arrived Nagpur from Chennai with over 1,000 MDMK supporters, told ANI reporters before heading to Sanchi.

â€œI had strongly objected to Rajapaksaâ€™s visit but Chouhan did not bother about our requests and went ahead to invite him. Similarly, Opposition Leader in Lok Sabha, Sushma Swaraj, also met Rajapaksa recently, which we did not like,â€ Vaiko added.

MDMK General Secretary Vaiko and over 1,000 party workers Wednesday staged a sit-in at Badhchicholi, a village in Madhya Pradesh near the Maharashtra border, after they were stopped from proceeding to Sanchi to protest the scheduled visit of Sri Lankan President Mahinda Rajapaksa.

However, after police stopped the MDMK convoy of 40 buses, Vaiko met Chhindwara Collector Mahesh Chandra Sharma and Superintendent of Police Purshottam Sharma, seeking to know the reasons for preventing them from moving on.

Inspector General (IG) Jabalpur Range, Madhu Kumar, told a news agency that he and others would not be allowed to proceed, as section 144 of Criminal Procedure Code was in force in Chindwara area.

The officials asked MDMK workers to move to temporary jails set up at Pandhurna, Sounsar and Chhidnwara, but Vaiko declined and staged dharna along with his workers on Nagpur-Chhindwara road.

Speaking there, Vaiko alleged that Madhya Pradesh Chief Minister Shivraj Singh Chouhan misled him by promising to discuss the matter in Bhopal, but he had been now stopped on the stateâ€™s border.

Vaiko said he had written a letter to Chouhan highlighting the atrocities against Tamils in Sri Lanka, but despite this, the President of that country was invited to the function to the lay the foundation stone of International Buddhist University at Sanchi (on Friday).

As the sit-in blocked the Nagpur-Chhindwara road, traffic was rerouted.

â€œI had strongly objected to Rajapaksaâ€™s visit, but Chouhan did not botherâ€¦.Opposition Leader in Lok Sabha Sushma Swaraj also met Rajapaksa recently, which we did not like,â€ Vaiko said.

Vaiko further said he had requested senior BJP leader L K Advani and party president Nitin Gadkari to intervene, as Rajapaksa government had â€œdemolished over 2,000 temples of Hindu Gods,â€ but they did nothing.