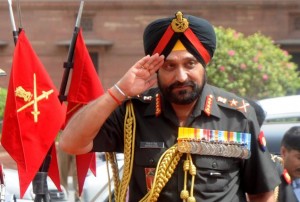 The Chief of the Army Staff of the Indian Army General Bikram Singh and a delegation of senior Indian Army officials is scheduled to visit Sri Lanka on Wednesday, the Sri Lankan Army Headquarters said. The visiting Indian Army Chief is scheduled to meet Sri Lankan President Mahinda Rajapaksa, Secretary Defence, Chief of Defence Staff and three forces Commanders. The Indian Army Commander will visit Security Force Headquarters Vavunia and the Ex detention Centre at Poonthottam which will be followed by a visit to Anuradhapura heritage sites.The Indian Army Chief will be the Chief Guest at the Sri Lanka Military Academy (Diyatalawa) Commissioning Parade of 157 Officer Cadets, which includes 18 female cadets. Two female cadets among them are from the Republic of Maldives. On the 23rd after visiting Kandy DaladaMaligawa and sightseeing tour of the hill country the Chief of Indian Army Staff will leave for India. â€œThis visit marks another important mile stone in the warm and cordial relations between the Indian and Sri Lanka armies which has endured over decades since independence,â€ the Sri Lankan Army Headquarters said. ]]>