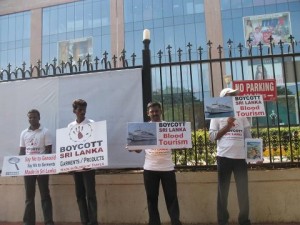 Even though the Tamil Nadu protest against the Indian Commerce and Industry minister visit to the Sri Lanka, India and Sri Lanka will work towards not only enhancing economic co-operation by doubling bilateral trade to $9 billion by 2017, but also for the early conclusion of the Comprehensive Economic Partnership Agreement (CEPA).

Commerce and Industry Minister Anand Sharma will be in Colombo for three days from August 3. He will be meeting his counterpart Rishad Bathiudeen to discuss ways to widen the free trade agreement in goods and expanding it to include services and investments. He would also be attending the India Show.

Â At present, bilateral trade stands at $4.5 billion. CEPA is aimed at liberalising trade in services and investments by updating existing agreements on investment protection and avoidance of double taxation. Mr. Sharma will also discuss the scope of strengthening the economic and trade cooperation between the two countries, it said.