The worst monsoon floods in a decade to hit the Indian north-eastern state of Assam have killed more than 80 people and forced around 2 million to leave their homes, officials said on Monday. 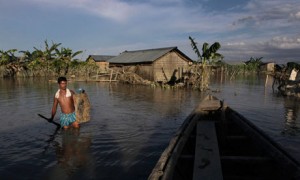 Nearly half a million people are living in relief camps set up across Assam, Prime Minister Manmohan Singh told journalists in Gauhati, the state capital. The rest of the 2 million displaced are staying with relatives or living in the open, sheltering under tarpaulin sheets.

Officials say 81 people have been killed over the past four days. Most were swept away when the Brahmaputra river overflowed and flooded villages; 16 people were buried in landslides triggered by the rains.

Teams of doctors have opened clinics in the 770 camps set up across Assam, one of India’s main tea-growing states. The hilly areas used to grow tea have not been affected, but rice fields lower down have been washed away.

Thousands of cattle perished after being swept away by the raging water or getting stuck in the mud. The stench of rotting animal carcasses was adding to the distress of the people in tents at the camps, officials said.

In the worst-hit Dhemaji district, entire villages were engulfed. Officials said Majuli island, one of the world’s largest river islands, was awash as water levels in the Brahmaputra rose. “This is one of the worst floods to hit Assam,” Singh said, announcing 5 billion rupees (Â£57m) in emergency funding.

Monsoon floods hit Assam, which has a population of 26 million, almost every year as heavy rains swells the Brahmaputra and tributaries that crisscross the state. (The Guardian).