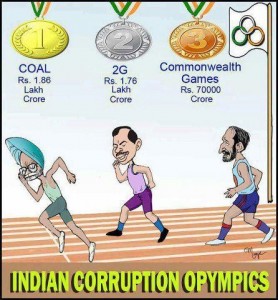 India’s opposition vowed on Wednesday to block parliamentary proceedings until the prime minister resigned over a coal scandal, raising the prospect of more legislative deadlock and stalled reforms. Prime Minister Manmohan Singh was implicated by the national auditor in a report published last Friday which suggested the government had lost out on billions of dollars of revenue by gifting away coal mining rights. Singh, who has seen his reputation as â€œMr Cleanâ€ plummet amid a string of scandals in his second term in government, served as acting coal minister from 2004-2009. Senior opposition leader Arun Jaitley said his Bharatiya Janata Party (BJP) would obstruct parliamentary proceedings until the 79-year-old Singh took personal responsibility and stepped down. â€œParliamentary obstructionism is normally to be avoided, but in rare cases parties do adopt it,â€ Jaitley told the Times Now television channel in an interview as both houses of parliament were adjourned. â€œThe way forward is that the prime minister must accept his culpability. The reason is very obvious. For five out of the eight years (analysed by the auditor)… he himself was the coal minister,â€ Jaitley added. The threat to disrupt parliament comes as India’s economy is badly faltering, with investors and business leaders looking for decisive action from the under-fire government to restore confidence and spur economic growth. In 2010, the BJP and opposition allies blocked an entire session of parliament, forcing adjournments for 22 business days in a row which meant no legislation was passed. The report by the Comptroller and Auditor General (CAG) said private companies had made windfall gains of about $33.4 billion since 2004 after being given mining rights via a process that â€œlacked transparency and objectivityâ€. The government had known of the huge profits for private operators, but had failed to introduce an open bidding process that would have brought in revenue for the national exchequer, the CAG said. The report did not contain any allegations of corruption or criminal practices. (AFP).]]>