The Indian prime minister, Manmohan Singh, is to fly to Assam on Saturday in an attempt to calm sectarian violence that has left at least 45 dead and caused 392,000 to flee their homes in the north-eastern state. 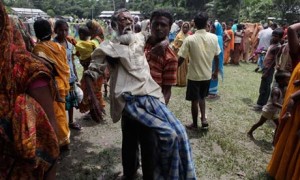 Singh is due to tour some of the 270 government relief camps set up in the last week in and around the district of Kokrajhar, where violence flared last Friday between members of the Bodo tribe and Muslim settlers from Bangladesh.

The Assamese state government announced a compensation scheme that will pay 600,000 rupees (£6,900) to the families of those killed in the clashes. Houses burned down in the uprising would be rebuilt, officials said, and civilians would be reimbursed Rs1,400 (£16) for lost utensils and Rs1,300 for clothes.

Mamata Banerjee, chief minister of neighbouring West Bengal, said her government would take the “best care” of refugees from Assam, treating them “like brothers and sisters”.

Assam’s chief minister, Tarun Gogoi, said his government would press Singh for financial assistance. Ignoring calls to stand down from those who accuse him of failing to tackle sectarianism during three terms in office, Gogoi said: “The only solution to these waves of ethnic conflicts is development, and tomorrow the state government will seek some kind of development package from the prime minister. Our job is to now to build confidence among the people so that they co-exist peacefully again.”

The opposition BJP party blamed the violence on what it called “the flood of Bangladeshi infiltrators into the state”. Sudheendra Kulkarni, a member of the BJP national executive, wrote: “The root cause of this violence is the joint failure of the federal and Assam state governments to stop wave after wave of Bangladeshis from swarming into different parts of Assam and drastically changing the state’s demographic profile, especially of the districts close to the border.

“In Bodo-populated areas, this flood has caused large-scale usurpation of tribal lands and made Bodos feel fearful that they are being marginalised in their own land.”

Many Muslims who have sought sanctuary in relief camps say their families have been peacefully and legally settled in the region for generations.

Subir Bhaumik, an Assamese journalist, said the violence was rooted in “a debate over so-called infiltration by outsiders”. He wrote: “Changing demography, loss of land and livelihood and intensified competition for political power has added a deadly potency to the issue of who has a right to Assam.” (The Guardian).