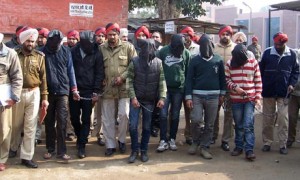 Indian police are investigating two new cases of gang-rape, one of a bus passenger in north-western Punjab state, the other of a woman who got off a train in a remote area in the state of Bihar and was assaulted and killed. The incidents are likely to fuel the continuing clamour for widespread change in India, coming four weeks after a brutal attack on a student on a moving bus in the capital Delhi led to outrage, anger, grief and thousands of people taking to the streets demanding legal and policing reforms to combat sexual violence. The student, who was returning from an evening at the cinema with her friend, died of her injuries nearly two weeks after the attack. The victim of the incident in Punjab was a 29-year-old woman travelling to her village in Gurdaspur district, 280 miles from Delhi, on Friday night, police officials said. The driver refused to stop at her village despite her repeated pleas and instead drove her, the only passenger on the bus, to a remote farmhouse where he and the bus conductor were joined by five friends. The men then took turns raping her throughout the night, the officials said. Gurmej Singh, deputy superintendent of police in Gurdaspur, said all of the six men detained for the attack had admitted their involvement. Details of the second attack are still sketchy and unconfirmed. Local police have said the 32-year-old victim got down from a stationary train between stations and was sexually assaulted by a group of unidentified, inebriated men in an orchard. Since the Delhi attack, dozens of incidents of sexual violence to women which would not usually be reported are being covered in the Indian media. Newspapers  also reported the case of a 16-year-old schoolgirl in Sonipat, Haryana, who was badly injured when she set light to herself in a suicide bid after being raped. The Delhi rape in December has set off an fierce debate about attitudes to women in India, where a woman is raped every 20 minutes according to official statistics. “There is discussion for the first time of what it means to be a women here especially the systematic harrassment in the street, on buses and so on. Gang rape is the end of a spectrum [of offences], not an aberration,” said Menaka Guraswamy, a lawyer involved in a successful recent campaign to stop a local rapper accused of encouraging misogynist attitudes with his lyrics performing in Delhi. Seema Mustafa, a writer on social issues who heads the Delhi-based Centre for Policy Analysis thinktank, said that in the past police had not “dealt with the issue severely”. “The message that goes out is that the punishment doesn’t match the crime. Criminals think they can get away it,” she said. In her first published comments, the mother of Delhi attack victim said on Sunday all six suspects in that case, including one believed to be a juvenile, deserve to die. She was quoted by The Times of India newspaper as saying that her daughter told her that the youngest suspect had participated in the most brutal aspects of the rape. Five men have been charged with the student’s rape and murder and face a possible death penalty if convicted. The trial is behind closed doors and media are banned from reporting any of the proceedings in the courtroom. A lawyer for one of the accused has claimed his client was badly beaten by police in detention. The sixth suspect, who says he is 17 years old, is likely to be tried in a juvenile court if medical tests confirm he is a minor. His maximum sentence would be three years in a reform facility. “Now the only thing that will satisfy us is to see them punished. For what they did to her, they deserve to die,” the newspaper quoted the mother as saying. There have been loud calls for a change in Indian laws so that juveniles committing heinous crimes can face the death penalty. The elderly, male-dominated Indian government has been heavily criticised for its slow and insensitive treatment of the issue. (The Guardian)]]>