<![CDATA[ <div> Four officers were suspended and another transferred after the victim’s family complained that police initially refused to register a case when they reported their concerns. 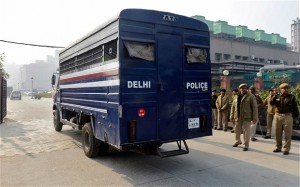 There is widespread anger at police reluctance to register cases affecting ordinary people in India and fear that they will demand bribes.
The victim disappeared on Friday evening after finishing her shift in a garment factory in Noida, an industrial and call centre towns just outside Delhi in Uttar Pradesh. When her father reported her missing to the police, they dismissed his concerns and suggested she had run off with someone. Her body was later discovered semi-naked on Saturday. Police said they were awaiting forensic tests to confirm whether she had been raped, but her family suspect local youths who had been warned earlier for stalking her. One had broken into to her family home and molested her, relatives said. Two men have been detained for questioning while police are searching for a third suspect. One of the men had earlier promised to marry the victim but she later discovered he was already married. Campaigners for India’s Dalits or ‘untouchables’ said she may have been targeted because of her low caste status.
]]>