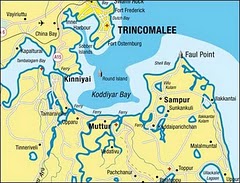 A serious rift has reportedly cropped up between the National Thermal Power Corporation (NTPC) in India and the Ceylon Electricity Board (CEB) over setting up of a 500-MW power plant in Trinco, which is expected to further delay implementation of the project

Indiaâ€™s Economic Times reported that Operation and maintenance (O&M) costs and return on investment are among the major issues over which the two companies continue to have differences.

The Economic Times quoted a source as saying that the CEB wants to change certain terms that have already been agreed upon by the two companies.

â€œIssues (related to the project) are yet to be resolved,â€ the source said.

According to sources, CEB has sought changes regarding return on investment and O&M costs, besides the heat rate of the coal-fired project.

Considering the slow progress in development of the project, NTPC is believed to be even looking to bring back its senior executives stationed in Sri Lanka for the plant, sources said.

The project was seen as a milestone in the bilateral economic cooperation between India and Sri Lanka.

The 500-MW project at Trincomalee is to be implemented by an equal joint venture company of NTPC and CEB. The agreement for the joint venture was inked in late 2011.

However, persisting differences are likely to delay the project, which is expected to go on stream by 2016.

In a communication to the CEB on January 15, NTPC said that â€œin our mutual interest, we should not reopen any of the settled issuesâ€.

â€œNTPC and CEB should now sign the PPA and other agreements to proceed for project development without further delay,â€ the communication said.

The draft Power Purchase Agreement (PPA) was finalised with CEB in 2011 after prolonged discussions on all issues, it said.

Among others, CEB recently has sought to reduce the return on equity investment to 12 per cent from 18 per cent as per the PPA initialled in February, 2011.

Electricity generated from the proposed 2Ã—250 MW plant would be supplied to CEB. Coal for the project would be imported and supplied by Lanka Coal Company (LCC), while land would be given by the Sri Lankan government on a long term lease.