Playboy’s iconic “bunnies” will make a demure Indian debut next month serving drinks at the brand’s first club in the country, which will open despite a nationwide ban on the adult magazine. 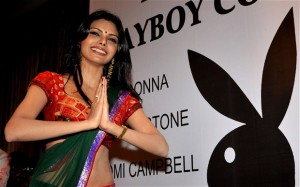 PB Lifestyle, the Indian firm with rights to the Playboy brand, will launch the club in the holiday state of Goa in December â€“ the first of 120 clubs, hotels, fashion cafÃ©s and shops planned over the next ten years.

Sanjay Gupta, chief executive of PB Lifestyle, said the famous bunny costume of a skimpy corset with a fluffy rabbit tail and ears would be adapted to suit India’s conservative values, and he stressed no nudity would be involved.

“Bunnies are an integral part of Playboy clubs,” he told AFP. “For the obvious reasons of Indian morality and sensibilities, we can’t follow the traditional costumes that Playboy bunnies are associated with.”

The new outfits will be revealed at the club’s launch at its 22,000-square-foot (2,050-square-metre) premises on Candolim beach in north Goa.

Playboy, along with a host of other foreign “adult” magazines, is not permitted in India owing to obscenity laws banning material deemed “lascivious or appealing to prurient interests”.

to pose naked for Playboy magazine this year, causing something of a stir in her home country.

“Super excited! It ain’t about nudity … (it is) about introducing a lifestyle of fun (and) glamour,” Chopra told AFP via her Twitter account after plans for the new club were revealed.