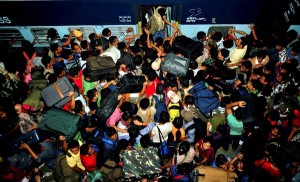 To check spread of rumours which has led to exodus of northeastern people from certain states, the Indian government has banned from today bulk SMSes and MMSes for 15 days across the country. “We have banned bulk SMSes and MMSes for 15 days,” Union Home Secretary RK Singh told PTI. The decision was taken after reports of widespread circulation of SMSes and MMSes containing misleading information about Assam violence, threats to people of northeastern origin living in other parts of the country and doctored videos. The government on Saturday said a bulk of the doctored incendiary videos and horrific clippings of atrocities allegedly committed on Muslims in lower Assam and Myanmar were uploaded on various blogs in Pakistan in a bid to incite the minority community in India. “As many as 110 websites were involved in spreading the doctored clips. We have blocked 76 of them, and are in the process of getting others deactivated,” he said, adding that Google and other sites, which hosted provocative blogs, have been approached. From today onwards, no one will be able to send more than 5 SMSes in one go and more than 20 KB of data through mobile phones during the ban period. Though the limit on SMS is on bulk messages, some operators have reportedly levied this cap on person-to-person SMSes as well. The ban came into force after Prime Minister Manmohan Singh said that spread of rumours by miscreants had led to people belonging to the north east to flee from Bangalore, Pune and some other parts of the country. Noting that the guilty should be brought to book, the Prime Minister said that at stake was not just unity and integrity of the country, but also communal harmony. Meanwhile, thousands of Assamese left for their state from Chennai for the 4th day yesterday.]]>