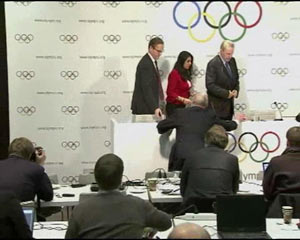 The International Olympic Committee (IOC) suspended India’s national Olympic committee on Tuesday because of government interference in its election process, two officials with knowledge of the decision told The Associated Press. After months of warnings, the IOC executive board imposed the sanction when the Indian Olympic Association failed to comply with the world body’s demands for holding independent elections, the officials said. The officials spoke on condition of anonymity because the official announcement hadn’t been made yet. An IOC news conference was scheduled for later Tuesday at the end of the executive board’s first day of a two-day meeting. International Olympic Committee spokesman Mark Adams said he could not comment. “I can’t discuss that because any decisions that are taken have to be communicated to any countries involved,” he said. In New Delhi, acting IOA president Vijay Kumar Malhotra told the AP that the association “has not been intimated about any suspension so far.” Suspension means the Indian body will stop receiving IOC funding and its officials will be banned from attending Olympic meetings and events. India’s athletes will be barred from competing in Olympic events under their national flag, although the IOC could allow them to do so under the Olympic flag. The IOC had also recently threatened to suspend Kuwait’s Olympic committee, but the Gulf nation amended its sports law last week in a bid to avoid any sanction. The IOC had repeatedly told the Indian body to adhere to its own constitution and the Olympic Charter and not follow the government’s sports code for this week’s elections. The IOC will not recognize the results if the elections are held under government rules. The Indians have been mired in wrangling over the elections to replace Suresh Kalmadi, who was jailed for nine months on corruption charges related to the 2010 Commonwealth Games in New Delhi. Kalmadi, who headed the IOA for 16 years, decided not to seek re-election.The Indian vote, originally scheduled for last month, has been postponed to Wednesday following the resignation of election commission chairman S Y Quraishi. On Friday, the IOA announced the appointment of some officials to posts which were not contested in the elections. Appointed as secretary general was Lalit Bhanot, who is also facing graft charges relating to the Commonwealth Games.  ]]>