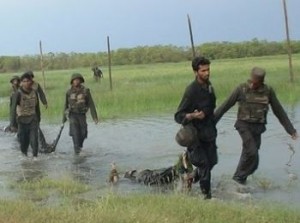 [1] Deaths caused by violence on both sides of this uprising were not carefully collated in any systematic way but an estimate of 50,000 is popularly used.
[2] The Bhurgher population make up roughly 0.2% of the population, according to the last complete Sri Lankan Census in 1981. They are an ethnic group of Eurasian descent, the result of intermarriage between Dutch, Portugese and English colonial male settlers and local women.
[3] UN Working Group on Enforced Disappearances quoted in Human Rights Watch’s report Recurring Nightmare: State Responsibility for “Disappearances” and Abductions in Sri Lanka, 27 August 2008; Asian Human Rights Committee, Large numbers of disappearances not addressed despite efforts of UN Working Group, 8 March 2011
[4] IRIN Report, Sri Lanka: Over 600 War Children Still Missing, 1 August 2011 http://www.irinnews.org/report.aspx?reportid=93381 based on reports by UNICEF’s Family Tracing Unit based in Vavuniya. The ICRC were approached by 20,000 families between 1990 and 2003 for help in tracing relatives missing as a result of the conflict, see ICRC Resource Centre website, Sri Lanka : ICRC asked to help solve missing persons issue, 1 September 2003  http://www.icrc.org/eng/resources/documents/misc/5hmlfb.htm The numbers of affected citizens rose exponentially in the final years of the conflict and protests and demonstrations are being held by family members of the missing in the North demanding information. See Dinasena Ratugamage, Never Ending Search for the Missing, BBC Sinhala, 22 June 2011. The military and government have been accused of attempting to disrupt these demonstrations.
[5] This is the figure used by the BBC in reportage, see for example: “Sri Lanka Army Deaths Revealed”, 22 May 2009 which states: “It is thought at least 80,000 people have been killed in the 26-year war.” Human Rights Watch also utilise this general figure, see their “World Report 2010” on Sri Lanka: “On May 19, 2009, the Sri Lankan government declared victory over the LTTE, marking an end to a 26-year-long armed conflict that had caused between 80,000 and 100,000 deaths.” See http://www.hrw.org/world-report-2010/sri-lanka
[6] See www.llrc.lk for mandate, submissions and the make-up of the Commission.
[7] Weeratunga, “Sri Lanka was on a Strong Wicket at the UN – Lalith Weeratunga.”
[8] See Nick Cumming-Bruce, “In Resolution, UN Presses Sri Lanka on Civilian Deaths”, The New York Times, 22 March 2012
[9] See the article “Sri Lankan NGO Activists Work with LTTE rump in Geneva” on the official government news portal:  http://news.lk/news/sri-lanka/1731-sri-lankan-ngo-activists-work-with-ltte-rump-in-geneva
[10] This smear campaign is documented by the human rights defenders’ NGO Frontline. See http://www.frontlinedefenders.org/node/17868 International State Crime Initiative
]]>