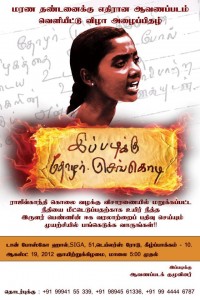 Martyr Senkodi documentary film group is having a launch function at Don Bosco hall in Chennai, Tamil Nadu. They would like to cordially invite Tamils to the film release function. Vettivel Santhirasekar directed the film. Day and Date: Sunday, 19th August Time: 17:00 pm Address: Don Bosco Hall, Tailors road, Keelpakkam-10 Senkodi was a Tamil girl an active volunteer of Makkal Mandram from the village Orikkai near kanchipuram. Senkodi immolates herself in front of the Village office at KancheeÂ­puram at 5.45 p.m 28-08-2011. She demanding that the death penalty of the three convicted in the Rajiv Gandhi assassination case be commuted. She wrote in her final letter “I am ending my life in a belief that my death would save the lives of Perarivalan, Murugan and Santhan.”  ]]>