Apple sold five million iPhone 5s in the first three days after the product’s launch, the company announced Monday. But the figures may not be enough to please analysts’ sky-high expectations and Apple’s shares fell over $10 in early trading. 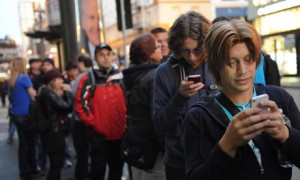 The sales set a new record for Apple. More than two million people pre-ordered the device, twice the number that pre-ordered its predecessor, the iPhone 4S, and the company sold out of its initial production run.

But the figures still came below the predictions of some Wall Street analysts, a number of whom forecast that almost twice as many would be sold.

“Demand for iPhone 5 has been incredible, and we are working hard to get an iPhone 5 into the hands of every customer who wants one as quickly as possible,” said Apple chief executive Tim Cook. “While we have sold out of our initial supply, stores continue to receive iPhone 5 shipments regularly and customers can continue to order online and receive an estimated delivery date.”

Apple sold four million iPhone 4S in its opening weekend last year. That device was seen as a smaller technological step forward compared to the iPhone 5. The iPhone 5 also had a bigger launch, going on sale in two more countries than its predecessor.

Apple has aggressive rollout plans for the newest iPhone. Nine countries are now selling the iPhone 5, and that will grow to more than 100 by the end of the year.

Colin Gillis, a technology analyst at BTIG in New York, said: “On any metric, this is a success. It’s one million more units than last time. But this is Apple, and given the expectations on this company, they have to not just set records – they have to smash them.”

Gillis said smartphone sales in general were slowing and that Apple had already conceded that sales of iPhone 4Ss had been hit as customers put off buying them in anticipation of the next release.

Apple had been expected to sell 25m iPhones in the September quarter and Gillis said the company could now miss that. “Quite frankly, a lot of people have smartphones already. The market is slowing down,” he said.