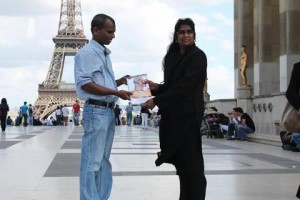 Martyr Senkodi documentary film group has released in Paris, France. Many Tamil activists and people have participated in the film release function, held in front of the Eiffel tower. Senkodi was a Tamil girl an active volunteer of Makkal Mandram from the village Orikkai near kanchipuram. Senkodi immolates herself in front of the Village office at KancheeÂ­puram on August 28, last year. She demanding that the death penalty of the three convicted in the Rajiv Gandhi case be commuted Meanwhile, in Chennai, â€˜IPPADIKKU THOZHAR SENKODIâ€™ film has been released by actor and Tamil activist Mr Sathyaraj.  ]]>