Iran condemned on Saturday the Obama administration for taking an Iranian militant group formerly allied with Saddam Hussein off the US terrorism list, saying it shows Washington’s “double standards.” 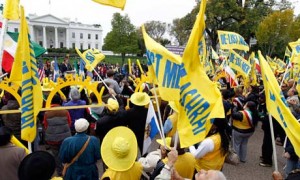 The People’s Mujahedin of Iran (MEK), which began as a guerrilla movement fighting Mohammad Reza Pahlavi, the last shah of Iran, helped overthrow Pahlavi in 1979 then quickly fell out with Iran’s first leader, Ayatollah Khomeini. The MEK fought in the 1980s alongside Saddam’s forces in the eight-year Iran-Iraq war but disarmed after the US invasion of Iraq in 2003.

The state department de-listed the group on Friday, meaning that any assets the MEK has in the United States are unblocked and Americans can do business with the organization.

“There are numerous evidence of the group being involved in terrorist activities. De-listing them shows America’s double standard policy on terrorism,” state TV said. The US distinguishes between “good and bad terrorists” and the MEK are now “good terrorists because the US is using them against Iran,” the report also said, adding that Washington and Israel use the group to spy on Iran’s nuclear program.

The US and its allies accuse Iran of using its civilian nuclear program as a cover to develop nuclear weapons. Iran has denied the claims, saying its nuclear program is peaceful and is intended for electricity generation and scientific research.

The state department said the MEK hasn’t committed terror for more than a decade. The group has also complied with demands that more than 3,000 of its once-armed members abandon their base in Iraq near the Iranian border for a camp outside Baghdad, an essential step to ending their decades-long presence in Iraq.

The group claims it is seeking regime change in Iran through peaceful means with an aim to replace the clerical rule in Tehran with a secular government.

However, a senior state department official suggested that removing MEK from the US terrorist list does not translate into a shared common front against Iran. The official said Washington does not view MEK as an opposition movement that can promote democratic values in Iran. The official on Friday briefed reporters on condition of anonymity because he wasn’t authorized to speak publicly on the matter.

Iran says MEK is responsible for the deaths of more than 12,000 Iranians over the past three decades, including senior government officials.

The MEK spent huge sums of money over years lobbying for removal from the US terror list, holding rallies in European capitals and elsewhere that featured luminaries like former homeland security secretary Tom Ridge from the Bush administration. Former House speaker and presidential candidate Newt Gingrich was among those recently welcomed by the MEK to Paris.

The group was protected in Iraq under Saddam Hussein, but its members are disliked by the new Iraqi government, dominated by Shia Muslims like those in Iran.

The United States had insisted the MEK’s members leave Camp Ashraf, their home in Iraq, as a condition for removal from the terrorist list. All but several hundred militants are now located in Camp Liberty, a former US base outside Baghdad, looking for placement in third countries.

The MEK was removed from the European Union’s terrorist list in 2009. (The Guardian).