Hundreds of demonstrators in the Iranian capital clashed with riot police on Wednesday, during protests against the crisis over the country’s currency. Police used batons and teargas to try to disperse the crowds.

The day after President Mahmoud Ahmadinejad appealed to the market to restore calm, the Grand Bazaar â€“ the heartbeat of Tehran’s economy â€“ went on strike, with various businesses shutting down and owners gathering in scattered groups chanting anti-government slogans in reaction to the plummeting value of the rial, which has hit all-time lows this week.

“Mahmoud [Ahmadinejad] the traitor â€¦ leave politics,” shouted some protesters, according to witnesses who spoke to the Guardian. Other slogans were “leave Syria alone, instead think of us,” said opposition website Kaleme.com. 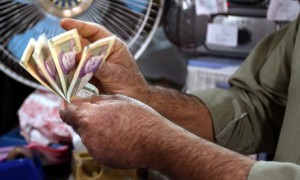 Iran’s alleged financial and military support for the regime of Bashar al-Assad appears to have infuriated protesters in the wake of the country’s worst financial crisis since the Iran-Iraq war in the 1980s.

Angry protesters and foreign exchange dealers were demonstrating near the bazaar in the south of the capital, where many exchange bureaux are located.

“The Bazaaris shouted Allahu Akbar [God is great] as they closed down their shops in the morning,” said a witness. “It’s impossible to do business in the current situation.” Amateur videos posted on YouTube which appeared to have been taken from Wednesday’s protests, showed demonstrators encouraging Bazaaris to close down shops in solidarity. Security forces were soon sent to quell the protests.

“They used teargas to disperse demonstrators in Ferdowsi Street and also blocked the streets close to the protests in order to prevent people joining them,” said another witness, who asked to remain anonymous. “Some shop windows in that area have been smashed and dustbins set on fire.” A number of demonstrators had been arrested, according to Kaleme.

A Bazaar official, Ahmad Karimi Esfahani, denied that the “turbulences” were linked to the business owners, claiming shops were closed for security reasons and not part of a strike. “The Bazaar will open tomorrow as normal,” he told the semi-official Ilna news agency. A conservative website, Baztab, described the clashes as “suspicious”, denying Bazaaris were involved.

The rial’s devaluation and soaring prices of staple goods are the latest signs that a combination of western sanctions targeting the regime’s nuclear programme and government mismanagement are compounding the country’s economic woes.

On Wednesday, many foreign exchange dealers and bureaux across the country refused to trade dollars and some currency-monitoring websites refused to announce exchange rates.

Some Iranians expressed anger on social networking websites to the national TV’s blackout of the protests, saying it discussed the European financial crisis with little, if no coverage, of Tehran’s unrest. The authorities were also reported to have jammed signals of the BBC’s Persian service as the protest unfolded.

The government has failed to bring the rial under control despite several attempts. It has lost 57% of its value in the past three months and 75% in comparison with the end of last year. The dollar is now three times stronger than early last year. The economy minister, Shamseddin Hosseini, said the government planned to “gather up” the unofficial currency market in the latest desperate ditch to curb the crisis.

On Tuesday Iranian authorities announced they would send security services to calm the market but Wednesday’s developments appear to show that the move has backfired.

Ahmadinejad was bombarded with questions about the currency crisis on Tuesday as he spoke to reporters in a press conference but the embattled president, who is under fire from his conservative rivals, rejected the suggestion that it was the result of his economic policies or government incompetence.

Instead, he blamed the rial’s slump on his enemies abroad and opponents at home, saying his government was the victim of a “psychological war”. Ahmadinejad acknowledged western sanctions have contributed to the crisis.

An opinion poll posted on a conservative website, Khabaronline.ir, showed that more than 90% of those participated were not convinced with Ahmadinejad’s responses on Tuesday.

Iran’s supreme leader, Ayatollah Ali Khamenei, speaking to elites on Wednesday, said the country was under pressure because “it did not yield to the demands of tyrannies”.

Iran is one of the world’s largest oil producers and relies on crude sales as the main source of its the foreign currency reserves. The latest US and EU embargo on the imports of Iranian oil has affected that reserve, sending the rial tailspinning and making the dollar hard to come by.

Commenting on Iran’s currency slump, the US secretary of state, Hilary Clinton, said that sanctions could be “remedied” switfly if Tehran were cooperating with the international community to address the questions about its disputed nuclear programme.

“They have made their own government decisions – having nothing to do with the sanctions – that have had an impact on the economic conditions inside of the country,” Clinton told reporters.

“Of course the sanctions have had an impact as well, but those could be remedied in short order if the Iranian government were willing to work with the P5+1 [the five security council members plus Germany] and the rest of the international community in a sincere manner,” she added. (The Guardian)