<![CDATA[doubled the number of uranium enrichment machines it has in an underground bunker, a UN report said on Thursday, showing Tehran continued to defy western pressure to stop its atomic work. <a href="http://www.eelamenews.com/?attachment_id=102170" rel="attachment wp-att-102170"> 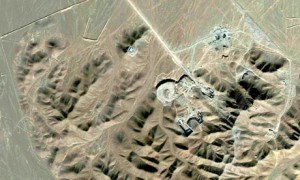 In the weeks and months when Israeli politicians increased their talk of air strikes on Iran’s nuclear sites, the Islamic republic was rapidly increasing the enrichment capacity of its Fordow site, buried deep underground to withstand any such hit. The UN International Atomic Energy Agency (IAEA) said in its quarterly report on Iran that the number of centrifuges at Fordow, near the holy Shia city of Qom, about 80 miles (130km) from Tehran, had more than doubled to 2,140 from 1,064 in May. The new machines were not yet operational, it said. Iran’s supreme leader repeated this week that Iran’s nuclear programme was entirely peaceful. But the expansion in enrichment infrastructure and the increase in stockpiles of potent nuclear material revealed in the report will do nothing to allay fears or reduce the diplomatic and sanctions pressure on Iran. The report showed that Iran had produced nearly 190kg of higher-grade enriched uranium since 2010, up from 145kg in May. Iran says it needs this material – which is much purer than fuel needed for electricity generation – for a medical research reactor, but it also takes it significantly closer to making potential bomb material. The IAEA also expressed concerns about Parchin, a military site south of the capital that it wants to inspect for evidence of past nuclear weapons development. “Significant ground scraping and landscaping have been undertaken over an extensive area at and around the location,” it said. Five buildings had been demolished and power lines, fences and paved roads removed, the report said, “extensive activities” that would hamper its investigation if granted access. “The activities observed … further strengthen the agency’s assessment that it is necessary to have access to the location at Parchin without further delay,” the IAEA said. Iran says Parchin is a conventional military facility and has dismissed the allegations about it as “ridiculous”. Foreign minister Ali Akbar Salehi, meeting UN secretary general Ban Ki-moon in Tehran on Thursday, was quoted by Iranian state TV as saying: “The west has put sanctions on Iran for years, however the Iranian nation continues to resist and make progress.” (The Guardian)]]>