<![CDATA[Only a US operation bigger than the invasions of Iraq and Afghanistan combined can stop Iran from its alleged pursuit of a nuclear bomb, a new military report said. Such action, however, risks igniting all-out war in the Middle East. <!--RTEditor:genereated-->Â­ 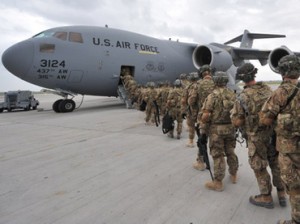 Amid escalating rhetoric from Israel and the US over military action against Iran, more than 30 former US diplomats, retired admirals and generals have assembled a report on the consequences of military action against Tehran. The study will be released on Thursday. The AP received an advance copy of the document, set to be released on Thursday, and reported that the analysis assessed the risks of a possible invasion of Iran, but provided no overall conclusion or recommended course of action. Retired Army Lt. Gen. Frank Kearney, who endorsed the report, claimed that it was intended to â€œstimulate thinking in the US about the objectives of a military attack on Iran beyond the obvious goal of hitting key components of Iran’s nuclear program.â€ The report said that a US military attack would harm the current regimeâ€™s political standing and damage its ability to launch counterattacks, but Tehran would almost certainly retaliate, â€œdirectly and through surrogates, in ways that risked igniting all-out war in the Middle East.â€ US strikes could destroy Iran’s most important nuclear facilities and damage its military forces but would only delay â€“ not fully stop â€“ the Islamic republic’s alleged pursuit of a nuclear weapon. “Clearly there is some [US] ability to do destruction, which will cause some delay, but what occurs after that?” Kearney said. â€œYou can’t kill intellectual power.” In assessing the costs and benefits of a possible strike, the review said that Iran could be stopped only by a military invasion and occupation â€œmore taxing than the Iraq and Afghanistan wars combined.â€ “Given Iran’s large size and population, and the strength of Iranian nationalism, we estimate that the occupation of Iran would require a commitment of resources and personnel greater than what the US has expended over the past 10 years in the Iraq and Afghanistan wars combined,” the report said. In the wake of recent anti-US protests across the Middle East, including violent clashes in Egypt and Yemen, the document also warned that such a strike â€œwould add to a perception of the US as anti-Muslim â€“ a perception linked to the US-led invasions of Iraq and Afghanistan and hardened by Internet-based video excerpts of an anti-Muslim film that may have fueled Tuesday’s deadly attack on a US diplomatic office in Libya.â€ (RT News)]]>