While Iranian lawmakers are still debating whether or not to shut down the Strait of Hormuz, the countryâ€™s powerful Revolutionary Guards are to conduct a military exercise, during which a replica US military base is set to be hit by missiles.

Â­The Revolutionary Guards say thousands of missiles are to be deployed during the three-day long drill. These include the Shahab-3 ballistic missile, which has a range of 1,250 miles (2,000 kilometers) and is capable of reaching Israel.

â€œAll units and missile bases have commenced their preparation and movement to the designated areas,â€ a statement published by the Revolutionary Guards by the official IRNA news agency reads. 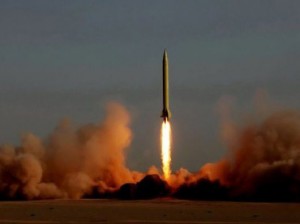 A mock air base, akin to US bases in Afghanistan, Bahrain, Kuwait and Saudi Arabia, is to be targeted during the three-day long drill to be held in Iranâ€™s Kavir Desert.

Iran had previously warned that it would target those bases if the US and Israel went ahead with an attack on Iran.

Hajizadeh said an Israeli attack on Iran would give the Islamic nation a â€œpretext to obliterate them from the face of the Earthâ€ and said the US would not be inclined to help its ally as its bases would be within the firing range of Iranian missiles.

The exercises will start on Tuesday, as Iran heads for the negotiating table in Istanbul with the five permanent members of the UN Security Council plus Germany (P5 + 1) in the latest round of talks on its contentious nuclear program. The last round, held in Moscow last month, was largely fruitless, with Iran unwilling to budge on its nuclear program until the West calls off its sanctions.

Iran has insisted that its nuclear program is strictly peaceful, but the West has continued hitting the country with more sanctions in an effort to force it to abandon the program.

On Sunday, the EU imposed its sanctions, establishing a bloc-wide embargo on all Iranian crude oil imports, and preventing EU companies from providing insurance to tankers carrying Iranian oil. That move prompted the Iranian Parliament to draft a bill that would close the Strait of Hormuz for tankers heading to countries that support the sanctions.

The US also slammed Iran with new sanctions last Thursday, reinforcing restrictions on foreign companies doing business with Iranâ€™s central bank unless their nations were granted exemptions on the basis of reduced Iranian oil supply.

In the meantime, sources indicate that Iran is already preparing for a full-scale war with the US, Israel and its allies.

A man who served in the Revolutionary Guardsâ€™ intelligence but later defected to a Western country was quoted by The Daily Caller as saying that the Iranian military is preparing to shoot down Western airliners in the event of an attack.

The paramilitary Basij forces would also be able to mount strong resistance to an invasion, Morteza Mirban, the deputy commander of the Revolutionary Guardsâ€™ ground forces told Basij News.

â€œToday over 3,000 boats are in the Persian Gulf and involved in commerce, constantly passing by Americaâ€™s naval ships,â€ he said. â€œThe question is how can America engage us in war not knowing how it will get hit next? If they dare to take up arms, they will see how they will regret their act.â€

Mirban also admonished potential attackers that â€œall of the enemyâ€™s basesâ€ were within the reach of Iranian missiles and that with allies such as Hezbollah, Iran was capable of striking them thousands of kilometers away. (RT News).