Based on past form, the Iranian president Mahmoud Ahmadinejad, who is due to address the UN general assembly on Wednesday, will unleash a tirade against global governance sprinkled with theological lessons, insist on his country’s nuclear rights, denounce sanctions and make incendiary statements on Israel. 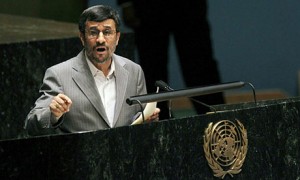 No matter how familiar his themes might sound, he can be confident that he still has the capacity to grab international headlines and stage an event that will cause both outrage and possibly some amusement in western circles.

In his final year in office, the 56-year-old president has increasingly become a lame duck. And Wednesday’s speech will probably be his last chance to exploit a high-profile international platform. Under Iranian law, Ahmadinejad cannot run for a third term and is due to stand down in June 2013.

He appears to have surpassed himself with preparations, taking more than 100 people with him to the US, a move that has infuriated his critics back home and even caused uproar among the country’s parliamentarians. Iranian MP Mansour Haghighatpour has criticised the president for his large entourage, saying that many have accompanied him to New York for “a picnic”.

Ahmadinejad’s opponents in Iran are closely watching him in New York, wary of any impact his words might have on the future of their country, which is suffering from financial stringency owing to international isolation over Tehran’s disputed nuclear programme.

Conservatives suspect Ahmadinejad might use his UN appearance to bolster his political status in Iran by portraying a president still much in control. After suffering a series of setbacks in a power struggle, Ahmadinejad and his team have lost a great deal of influence over Iranian politics. The opposition is worried the president’s UN speech might exacerbate the country’s political and financial situation.

Those watching outside have their eyes on any hint of a change in policy over Tehran’s nuclear activities or its unwavering support for Syria’s Bashar al-Assad’s regime, subjects that are likely to be mentioned in his speech.

On the nuclear issue, Ahmadinejad may choose to highlight the recent assassinations of a handful of Iranian scientists, attempting to portray Iran as a victim of a western-led campaign against his country’s advances in science and technology.

Last year, Ahmadinejad caused uproar and provoked a diplomatic walkout by referring to 9/11 as a “mysterious” incident that he said was used by the US as a pretext to attack Afghanistan and Iraq. At the time, he also reprimanded the US for killing Osama bin Laden without putting him on trial and then burying his body at sea.

“By using their imperialistic media network, which is under the influence of colonialism, they threaten anyone who questions the Holocaust and the September 11 event with sanctions and military actions,” he said then.

Ahmadinejad’s earlier remarks in New York this week, which can hint at the range of subjects he might touch on in his speech, include issues such as the country’s nuclear negotiations, the threat of an Israeli military strike, Syria and an Islamophobic film that has triggered protests across the Muslim world.

On the threat of war from Israel, Ahmadinejad said his country did not take them seriously. “We have all the defensive means at our disposal and we are ready to defend ourselves,” he said.

Despite a plea this week by the UN secretary general, Ban Ki-moon, who warned the Iranian president recently to avoid “incendiary rhetoric”, Ahmadinejad has again used his New York visit to make strongly worded statements about Israel, saying the country had no roots in the Middle East and would be “eliminated”.

A White House spokesman reacted by describing his comments as “characteristically disgusting, offensive and outrageous”.

Ahmadinejad gave an interview with AP on Tuesday in which he spoke of a world where a “new order” would inevitably replace the era of what he called US bullying.

Earlier in his trip, in an interview with CNN’s Piers Morgan, he was questioned on his views on homosexuality. Ahmadinejad said: “I’m sorry. Let me ask you this. Do you believe that anyone is giving birth through homosexuality? Homosexuality ceases procreation. Who has said that if you like or believe in doing something ugly, and others do not accept your behaviour, that they’re denying your freedom?”

In another interview, when asked about an Iranian institute raising the bounty on Salman Rushdie, Ahmadinejad responded: “Salman Rushdie, where is he now? … There is no news of him. Is he in the United States? If he is in the US, you shouldn’t broadcast that, for his own safety.”

It is perhaps unsurprising then that also accompanying Ahmadinejad’s visit to New York have been near-constant demonstrations in front of his hotel and at the UN headquarters. (The Guardian).