Iranians are suffering their worst financial crisis since the Iran-Iraq war in the 1980s, with the national currency hitting an all-time low and the prices of staple goods soaring. 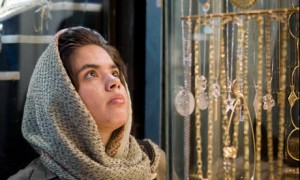 With the Iranian economy crumbling under escalating western sanctions, the rial was sent into a tailspin on Monday, dropping by more than 15% to its lowest-ever level against the dollar. At midday, 34,500 rials bought $1 on the open market, compared to 29,600 rials on Sunday’s close, according to Iranian currency-monitoring websites.

Iran’s president, Mahmoud Ahmadinejad, had previously rejected predictions that the rial would drop as low as 30,000 rials against the dollar, saying that such suggestions amounted to little more than “psychological war”. The latest news will come as a further blow to a president already widely seen as a lame duck. Ahmadinejad will stand down in June 2013, and cannot run for a third term under Iranian law.

“What an embarrassment for Ahmadinejad,” said Farshad, a student at Tehran University. “The economy is in crisis and he is either blind to it or simply doesn’t want to see it.”

Western sanctions are compounding the country’s economic woes, sending the national currency into a nosedive and making dollars hard to come by. The situation has worsened significantly in recent months; the latest US and EU sanctions on Tehran came into effect in July. As a result, the prices of chicken, milk, cheese, bread, sugar and yogurt, among other staples, are now rising almost every day.

For Zohreh, a middle-aged housewife living in east Tehran, the current crisis evokes the bad old days of the Iran-Iraq war. “It’s like the war years, the price today is different from the price yesterday,” she said. “For certain items you have to queue up and some are not available anymore.”

Zohreh, like millions of other Iranians, receives a monthly government payment to families to compensate for a cut in subsidies. But she said the money, known as Yaraneh, no longer meets her needs. “Just nine months ago, I used to go to the market with 120,000 rials in my pocket and come back home with a basket of vegetables, fruits and staples but now for [the] same items I have to pay 300,000 rials.”

The rial has lost 57% of its value in the past three months and 75% in comparison to the end of last year. The dollar is now three times stronger than early last year.

Iran, one of the world’s largest oil producers, relies on crude sales for 80% of its export revenue and to bring in most of the foreign currency. In the wake of the currency crisis, many Iranians who have lost faith in the rial are now contributing to its instability by rushing to convert their assets and properties to foreign currency and gold.

“The rial’s fall has affected all aspects of life in Iran,” said Amir, a shopkeeper in Tehran. “It’s not only the prices of imported items that are increasing but domestic products have also been affected.” He pointed to the price of a box of domestically made cigarettes, Bahman, which he said had doubled since last year. “You can only rely on foreign currency and gold these days in Iran.”

Among those bearing the brunt of the crisis are patients and hospitals reliant on currency for imported medicines and foreign-based services. Iran’s Haemophilia Society, for example, has blamed the sanctions for risking thousands of children’s lives due to a lack of proper drugs.

The government has repeatedly attempted to bring the currency under control with no success. Last week it launched an exchange centre aimed at stabilising the rates, but the rial’s fall has since increased.

Previous attempts also include a sharp rise in interest rates in February and an order for an imposed exchange rate to be used both in banks and on the open market. At the time, the police were sent to exchange bureaux to implement the order but they reacted by closing down temporarily or refusing to buy or sell foreign currency on official rates.

Hassan Hakimian, an Iranian economic expert and director of the London Middle East Institute at the School of Oriental and African Studies, said: “The rapid depreciation of the rial reflects mainly negative market sentiments and an expectation that the Iranian government will continue to experience severe difficulties in selling its oil in international markets as the sanctions noose tightens.”

Iran’s economic weaknesses – perpetually high unemployment and government mismanagement – have been masked in recent years by the high price of oil but its very dependency on oil means the embargo has had a significant impact.

Despite the recent rial crisis, Hakimian believes the Iranian economy is still not on the brink of collapse.

“Talk of collapse as the Israeli minister of finance has recently mentioned is inaccurate and emotive. The enormous difficulties experienced could in the worst-case scenario result in a freefall for the currency (like in Zimbabwe) and result in hyperinflation (again as in Zimbabwe). Even unpopular governments in such harsh situations survive.”

He added: “These are harsh times for the ordinary Iranians and there is no doubt that since the end of war with Iraq in the late 1980s, they have not experienced such hardship and uncertainty. Unfortunately, there is a serious risk – looking at Iran from the outside – that the US and EU will take this as prima facie evidence that sanctions are ‘working’: the logic being that ‘if it is hurting, it is working’.”

Britain, France and Germany are pushing for already tough EU sanctions on Iran to be tightened further later this month, to close some of the larger loopholes. Among the measures being sought are stricter maritime controls, which would make it harder for Iran to reflag its ships to sidestep shipping and insurance sanctions. Western European countries also want to put more Iranian banks on the banned list. Rather than targeting specific firms, which can change names to stay ahead of sanctions, the UK is proposing the imposition of sanctions on whole sectors of trade with Iran to cover materials that could help Tehran expand its nuclear programme, particularly uranium enrichment.

Britain also wants loopholes closed on oil sanctions, though officials would not say whether the new measures would target the National Iranian Oil Company, which Washington last month explicitly linked to the Islamic Revolutionary Guard.

London, Paris and Berlin are seeking to have the upgraded sanctions agreed at a meeting of EU foreign ministers on 15 October, but the proposals are meeting resistance from other member states concerned over their rebound effect on the European economy. British officials are unsure whether agreement can be reached in time.

In Washington on Monday, a former US ambassador to the UN and under-secretary of state, Thomas Pickering, questioned the logic behind US sanctions.

“We issue licences for sales of food and medicine to Iran, but it is not legal for them to pay for it,” Pickering told a meeting of the National Iranian American Council. (The Guardian)