A string of bombings and shootings have killed at least 106 people and injured nearly 200 across Iraq, officials said, in the nation’s deadliest day in more than two years. 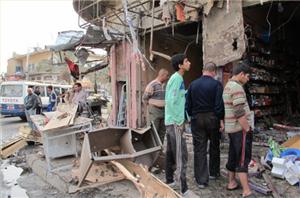 The co-ordinated attacks in 15 cities on Monday come days after the leader of al-Qaida in Iraq warned in a statement that the group was reorganising in areas from which it retreated before US troops left the country last December.

The blasts all took place within a few hours of each other. They struck mostly at security forces and government officials â€“ two of al-Qaida’s favourite targets in Iraq.

“It was a thunderous explosion,” said Mohammed Munim, 35, who was working at an interior ministry office that issues government ID cards to residents in Baghdad’s Shia-dominated Sadr City neighbourhood when a car exploded outside. Sixteen people were killed in the single attack.

“The only thing I remember was the smoke and fire, which was everywhere,” said Munim from his hospital bedl. He was hit by shrapnel in his neck and back.

The worst attack happened in the town of Taji, about 12 miles (20km) north of the capital where a double bombing killed at least 41 people. The blasts were timed to hit as police rushed to help victims from a series of five explosions minutes earlier.

And in a brazen attack on Iraq’s military, three carloads of gunmen pulled up at an army base near the north-eastern town of town of Udaim and started firing at forces. Thirteen soldiers were killed, and the gunmen escaped before they could be caught, two senior police officials said.

The overall toll made Monday the deadliest day in Iraq since US troops left. The previous deadliest day was 5 January, when a wave of bombings targeting Shias killed 78 people in Baghdad and outside the southern city of Nasiriyah.

Last weekend, the leader of al-Qaida’s affiliate in Iraq warned that the militant network was returning to strongholds lost during the Americans’ tenure.

“The majority of the Sunnis in Iraq support al-Qaida and are waiting for its return,” Abu Bakr al-Baghdadi, head of the Islamic State of Iraq since 2010, said in the statement, which was posted on a militant website. (The Guardian)