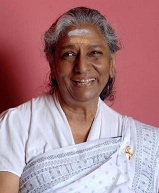 Legendary playback singer Smt S Janaki has refused to accept the Padma Bhushan award that has been announced on the eve of the Republic Day. Janaki amma has said that she is rejecting the award as it had been conferred too late to her. She also expressed her dissatisfaction over the government not properly recognizing artist from the Southern part of the country for their talent and contribution. Speaking to media persons, the 74-year old veteran said, “I have been singing for the last 55 years and have over 15,000 songs in Tamil, Telugu, Kannada, Malayalam and Hindi to my credit. I should have been given the highest civilian award of `Bharat Ratna’ if the Government wanted to recognize my work. I am not interested in any other awards like the Padma awards.” She further added, “I’m extremely disappointed by the fact that north India has been given more prominence than south India. Government should show some more consideration to the artists from the Southern parts of the country in recognizing their talents and contributions.” Janaki, who had won four national awards, made her singing debut in 1957 Tamil film ‘Vidhiyin Vilayattu’. (KT)]]>