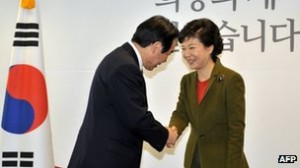 A Japanese special envoy has met the South Korean president-elect in Seoul in a move aimed at helping soothe relations between the two countries.

New Japanese Prime Minister Shinzo Abe sent envoy Fukushiro Nukaga to deliver a letter to South Korean President-elect Park Geun-hye. The two states have been involved in a prolonged row over disputed islands. Mr Abe was sworn in in December, while Ms Park is set to assume office next month. Diplomatic relations became tense after South Korean President Lee Myung-bak made a surprise visit last year to the disputed islands known as Dokdo in South Korea and Takeshima in Japan.

North Korea also claims the islands, which consist of two main islands and about 30 smaller rocks, the waters of which are seen as valuable fishing grounds.

“At a time when a new government starts [in both countries] I hope we can make a mutual effort to build trust based on people’s sentiment and strengthen our bilateral ties in various fields,” Ms Park said during the meeting. “As both Japan and South Korea have new governments, I would like to play the role of mediator so that this year can be a good one for the two countries,” Mr Nukaga said before he left Japan. “Prime Minister Abe believes that Japan-South Korea relations need to be solid for the stability of East Asia. I want to convey that message.” Ms Park had turned down an earlier request for a meeting with Japan last month, citing a tight schedule. Mr Abe had said earlier this week that he wanted to make a good start with South Korea. The talks have been met with some protests in South Korea. One of the demonstrators, a 63-year-old man, stabbed himself in the stomach with a knife. The man had also previously rammed his truck into the Japanese embassy’s gate last year, reports Yonhap news agency. That incident prompted a diplomatic protest from Japan. Relations between Seoul and Tokyo have frequently been troubled by issues from their shared history – including Japan’s use of military sex slaves or “comfort women” during World War II, says the BBC’s Lucy Williamson in Seoul. Many had judged that Japan’s new nationalist leadership would mean further tensions on such issues, but others have pointed to the economic and security incentives for both countries to work together, our correspondent adds. A South Korean coastguard detachment has been stationed at the disputed islands since 1954. Both Japan and South Korea say they have long-standing historical ties to, and claims over, the island grouping. (BBC)]]>