Japan has launched naval drills with the US in spite of heightened tensions with China over a territorial dispute. The exercise was initially planned to simulate an island re-occupation, but was scrapped for naval operations to avoid agitating China.

The 11-day drills are aimed at boosting the defense of Japanâ€™s southwestern island territories and will involve more than 37,000 Japanese personnel and 10,000 US forces, along with an aircraft carrier. 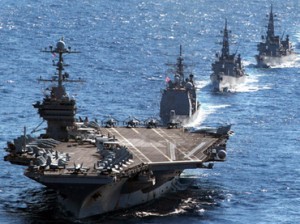 Operation Keen Sword was originally planned to incorporate a mission to simulate the retaking of an island. Although neither the US nor Japan specified if the mission was aimed at the disputed archipelago â€œit was widely perceived they had in mind the Senkaku Islands,â€ said Japanese newspaper Kyodo.

The Senkaku Islands, known as the Diaoyu by the Chinese, are claimed by both China and Japan and are the source of simmering tensions between the two nations. In view of the escalating dispute, the plans to enact a re-taking operation on Irisunajima Island were shelved so as not to goad China.

The islands are uninhabited, but are believed to hold rich oil and gas deposits. The archipelago has changed hands a number of times over the years, but has been administered by the Japanese since 1975. Taiwan also lays claim to the islands.

Given the scope of the Keen Sword maneuvers, the Chinese regard it as a provocation. Washington and Tokyo, however, maintain that it is merely a routine drill, harking back to the last Keen Sword exercise, which took place in 2010.

While the US does not openly support either party in the island dispute, it is obliged to protect Japanese territory from an â€œarmed attackâ€ by a 1960 mutual security treaty with Japan.

In recent weeks both China and Japan have been sending patrol ships to the disputed islands and exchanging aggressive rhetoric.

Senior Japanese and Chinese Foreign Ministry officials agreed to extend dialogue over worsening diplomatic ties caused by the island dispute through to Monday, following a meeting at the weekend.

It is the third high-level meeting between the two governments since the Japanese state purchased three of the five islands from their private owners, provoking Chinese rage and intensifying the dispute. (RT News).