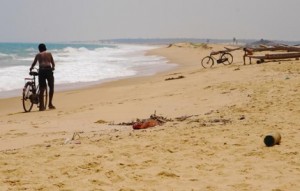 U.N. estimates say between 70,000 and 100,000 people died in this tear-shaped island, as the ethno-political conflict came to a bloody end four years ago.

(JAFFNA Int; Business Times) – The dusty army checkpoint along the infamous A9 highway was the first sign Iâ€™d entered the â€œotherâ€ Sri Lanka — the one that required an additional copy of my passport, my purpose and an inspection of my things. The next clue was the colossal yellow water tower lying horizontal on the roadside at Kilinochchi. Its gaping interior could easily house the entire population of this former capital of the Liberation Tigers of Tamil Eelam, or LTTE, an oft-misunderstood separatist group that the FBI once described as â€œamongst the most dangerous and deadly extremist outfits in the world.â€

Then, just after our rickety sun-bleached bus crossed the Elephant Pass and entered the Jaffna Peninsula, there was yet another reminder that Sri Lankaâ€™s 26-year civil war was no distant memory: cherry-red skull signs. They protruded like lollipops out of the arid fields and, as the families walking past knew all too well, meant the area was rife with unexploded mines.

This road from Vavuniya to Jaffna is known as the â€œHighway of Blood.â€ The LTTE and Sri Lankan Army fought over it for nearly two and half decades, and itâ€™s been the only thing connecting the peninsula with the mainland since the trains stopped running in 1990.

The trip between the two cities would have taken as long as 16 hours just four years ago. Now, with vital roadwork nearly complete, my bus bumped through the windswept Vanni and across the Jaffna Lagoon in just under five.

The opening of the road itself may have done more to help Sinhalese-Tamil relationships than the government ever did by allowing the communities to interact in a normal way after so many years of isolation. See, Jaffna is not only separated from the rest of Sri Lanka geographically, but also culturally. Whereas the Sinhalese majority is predominantly Buddhist, the Tamil minority is largely Hindu. It was these differences, after all, that led to one of the bloodiest civil wars in living memory.

U.N. estimates say between 70,000 and 100,000 people died in this tear-shaped island, and, though the ethno-political conflict came to a bloody end four years ago this May, at Mullaitivu, along the northeastern shores, itâ€™s Jaffna that has always been the beating heart and cultural center of Hindu-Tamil Sri Lanka. Itâ€™s Jaffna that played a crucial role in the lead-up to the separatist conflict. And itâ€™s Jaffna that stands to play a vital role once again in the rebirth of northern Sri Lanka. But it wonâ€™t be easy.

The bus into town dropped me at the mustard-yellow Jaffna market, where I hopped in a pink three-wheeler to find a hotel. It should have been an easy process, I thought, but each hotelier head-wiggled me away with the same message: â€œfully booked.â€

Jaffna — a place where power is not a given, cokes are served warm, and samosas are still called midi-vedi (Tamil for land mine) — is not your average tourist draw. Lingering warnings have ensured that 99 percent of Western visitors remain in the islandâ€™s lower half.

The Sinhalese, however, were everywhere. One could connect the dots up the A9 to Jaffna and every town as far as the eye could see by drawing lines from one army garrison to the next. But it wasnâ€™t just military troops — by some estimates 98,000 of them — it was everyday Sinhalese.

Kumar was waiting for a tour bus packed full of them when I arrived at the New Bastian Hotel, the first place with a vacancy in Jaffnaâ€™s leafy Chundikuli neighborhood. The hotel was known as somewhat of a Hotel Rwanda-style safe house for NGO types during the war.

As he checked me in, Kumar explained that he and his wife moved back to Sri Lanka from Bern in 2006, after 20 years abroad. â€œWe moved to Colombo, but I felt more of a foreigner there than I ever did in Switzerland,â€ he said. So they moved home to Jaffna the next year. Six years later, Colombo comes to Kumar by the busload every day, thanks to the A9 repairs.

Some of the Sinhalese tourists visit long-separated friends or explore the once-inaccessible pilgrimage sites, but others are in this part of the country to celebrate the triumphant acts of their peers at sites like the star-shaped, Portuguese-built Jaffna Fort, or Velupillai Prabhakaranâ€™s bunker (former hideout of the Tamil Tiger leader), MV Farah III (a Tamil Tiger training ship) and the new War Museum (whose signs are in English and Sinhalese, not the local Tamil) — all of which are closer to Mullaitivu.

â€œThe Sinhalese love to party and have fun,â€ Kumar explained as we made our way to the rooftop terrace and glanced at a group of Sinhalese tourists gathered across the way. â€œBut the Tamils,â€ he added with a wry smile, â€œwe rarely have any money for pleasures. Tamils have to save for expensive dowries.â€

The LTTE were unlikely proponents of womenâ€™s rights and abolished both the dowry and caste systems in Tamil society during their periods of control. â€œThis was one of the good things they did,â€ Kumar noted. But then he formed his hands into air pistols and explained the way in which they enforced it.

The next morning, I awoke early and coerced a three-wheel driver into taking me on a loop tour of the peninsula. The roads out of town were pockmarked in crumbling villas, each absorbed in undergrowth and inhabited only by wild street dogs.

The postwar boom that many international banks expected in Jaffna has yet to materialize. Many on the peninsula simply donâ€™t have the proper documentation or guaranteed security banks demand to advance loans for businesses or aid in rebuilding some of the estimated 160,000 homes that were either damaged or destroyed during the final phase of the war.

A March 2012 International Crisis Group report concluded that, with regard to development and humanitarian projects in the north, the exclusively Sinhalese military determines â€œhow, where and by whom resources and services are distributed; and who benefits from them.â€

â€œThe heavy militarization of the [northern] province, ostensibly designed to protect against the renewal of violent militancy, is in fact deepening the alienation and anger of northern Tamils and threatening sustainable peace,â€ the report concluded.

The problems for the Tamils began, in earnest, back in 1995, when the Sri Lankan military recaptured Jaffna after a decade of LTTE rule. Tens of thousands of homes were occupied — many on prime agricultural land — and turned into high-security zones, which covered nearly 20 percent of the peninsula.

Beaches like Munai near Point Pedro could easily run a good trade, were some of the peninsulaâ€™s estimated 800,000 remaining unexploded ordnances not lurking nearby. Another potential attraction in the area was recently decimated: LTTE leader Velupillai Prabhakaranâ€™s childhood home in Valvettithurai.

While the Sri Lankan Army has commemorated any artifact celebrating Prabhakaranâ€™s death, all thatâ€™s left of his humble prewar life is a fading sign — though bullet-riddled buildings in town serve as a testament to the war he helped inspire.

My three-wheel driver, Balisingha, belonged to the dwindling constituency of theorists who believe Prabhakaran escaped and is living out his life in exile. He explained his evidence as we idled in front of the hole that was Prabhakaranâ€™s home, then he showed me an article in the Tamil-language Uthayan newspaper that featured three shocking photos (unearthed by a U.K. documentarian in late February) that the paper said confirmed the Sri Lankan Army captured Prabhakaranâ€™s 12-year-old son alive and fed him snacks before murdering him in cold blood.

The same paper had famously run a series of articles on the militaryâ€™s abuse of private land in northern Sri Lanka, and this April, less than a month after I left Jaffna, three armed men broke into its headquarters and set the printing presses on fire.

Freedom Is An Elusive Feeling

The sight of a pink-bellied tourist at Casuarina Beach was immediately cause for celebration. The beach, which Kumar had recommended, was nestled in the northern corner of Karaitivu Island, a dollop of land linked to the Jaffna Peninsula by a long, partially flooded causeway.

â€œBefore, we only saw white people with the Red Cross,â€ said Sunil, a 20-year-old Christian Tamil who wasted no time informing me that he loved David Beckham and Barack Obama in equal measure. â€œNow we see you at the beach. Now we have peace, we can relax and have fun. During the war, there was no time for fun.â€

Everyone in northern Sri Lanka, it seemed, was talking about fun — about whether or not they had any of it. The consensus was mixed.

For Tamils of a certain age, the end of the war promised a new life free from bombardment by the Sri Lankan Air Force and forced conscription by the LTTE. Many initially greeted the turn of events in 2009 with overwhelming relief, but the reality has been nothing short of bittersweet.

No sooner had Sunilâ€™s friends and I gathered for a round of cell phone photos under the palmyra palms, when two army guards marched over and ordered them away from me. The Tamils may not be anyoneâ€™s pawns anymore, and they may not be in immediate danger, but freedom is still an elusive feeling.

I returned to Jaffna at dusk, the violet hour when crows swoop into the city and scare the butterflies away. Back at the New Bastion Hotel, I ran into another postwar returnee who proudly informed me that he was a famous Sri Lankan tennis player (and thus did not want to be named in any stories). He was in town with his wife to run workshops for local kids.

â€œIâ€™m from Jaffna, but my wife is from the south. We were never supposed to marry,â€ he shared. When tensions reached a fever pitch in 1983, the pair fled to Toronto. They lamented the state of affairs in Jaffna, as we walked down the dark halls of the New Bastion. Why had so little changed in 30 years, they wondered? Why had the cemeteries of the fallen Tigers and the house of Prabhakaran been bulldozed? Why were they, a Tamil and a Sinhalese walking down a hall, still such an oddity?

These are the same questions every group from the U.N. to Amnesty International is asking. The problem, experts say, is that the Sri Lankan government still views the LTTE conflict purely as a terrorism issue — a bad sign of reconciliation in a country whose civil war began, in part, because Tamils said they felt like second-class citizens.

In a resolution this March, the U.N. urged Sri Lanka to investigate human rights violations and curbs on freedom of expression.

“This resolution â€¦ re-affirmed that Sri Lanka must take meaningful action on reconciliation and accountability in order to move forward,” U.S. Secretary of State John Kerry said, adding, â€œThere is much work still to be done.”

Neither the Tamils nor Sinhalese deny that, though they differ on the reasons. They also differ on the facts surrounding the final months of the separatist conflict.

In some wars, thereâ€™s an obvious victim and villain, but in this one, both sides swapped roles so often that itâ€™s impossible to draw a line down the middle. What becomes abundantly clear to the visitor, however, is that Sri Lankaâ€™s bloody civil war had decisive winners and losers.

Like the A9 highway that carried me back to Colombo, the road ahead for the Tamils will be long and bumpy. But while the destination may be elusive at the moment, the journey toward a new normal has finally begun.