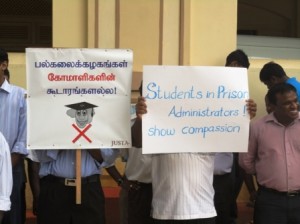 The Jaffna University Science Teachers’ Association has called for intervention by Sri Lankan President Mahinda Rajapaksa. The Association said it wasforced to write to Rajapaksa because no official in Jaffna seemed “able to deal with the problem or to adequately comprehend our concern.” The association said there was no agreement or consensus among the university community on the action taken by some students to observe “Heroes’ Day.” The significance of the actions had to be discussed and differences of opinion sorted out, they said. In the absence of a political settlement to the problems in the North and East, “residual influences” have been allowed to legitimise November 27 as a day of defiance, the association added. Rajapaksa has been in politics for several decades and was at the centre of two insurgencies in the South, the Jaffna University Science Teachers’ Association said. “Such feelings are not a police matter, but are rather to be handled as part of the political task of reconciliation and rebuilding,” it was pointed out. In an open letter to the Jaffna University Vice-Chancellor, the University Teachers’ Association of Jaffna (UTAJ) called for the “immediate removal of military, Police and security checkpoints around the campus (set up after November 27).” It also demanded a guarantee that no outsider, particularly military or Police, be allowed to enter the Jaffna University or hostels without permission from the university authorities.]]>