A day after Union home minister P Chidambaram called on him, DMK chief M Karunanidhi on Monday said the demand for Eelam (a separate Tamil land in Sri Lanka) will not be a topic of discussion at the proposed conference of the recently revived Tamil Eelam Supporters Organisation (TESO) to be held in Chennai on August 12. 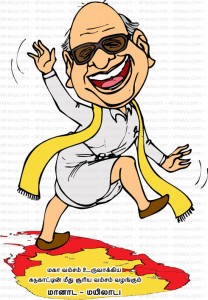 To a query from reporters, Karunanidhi said, “It’s different to have an opinion on a separate Eelam, but we don’t intend to put it up as a topic for discussion in the conference and create any confusion.” He added that the conference was more importantly to discuss the various solutions to the Sri Lankan Tamil problems and ensure they get a good livelihood.

DMK sources had told TOI on Sunday that the home minister, who met Karunanidhi at his Chennai residence, had requested the DMK chief not to bring up the Eelam demand during the TESO meet. Karunanidhi, however, denied that Chidambaram had made such a request on behalf of the UPA government. He told reporters in the city, “There is no pressure from the Centre not to talk about a separate Eelam state. Chidambaram did not discuss TESO with me.”

DMK leaders had admitted that their party chief was quite upset with the Centre’s advice to him to refrain from bringing up the Eelam issue as it could cause some embarrassment to India and strain ties with Sri Lanka. It is interesting to note that these developments come in the wake of the Centre’s decision to extend the ban on the LTTE. The Union government notification extending the ban on the outfit, which was virtually decimated in 2009, was issued on Saturday last. “I have nothing to say on the extension of ban on LTTE,” said Karunanidhi when sought for a reaction.

Karunanidhi said several leaders, including Farooq Abdullah, Sharad Yadav and Ram Vilas Paswan had written to him confirming their participation in the TESO conference to be held in Chennai. The DMK chief has showcased the conference as a major initiative of his party. He said leaders from several countries like Africa, Australia and New Zealand have agreed to come, besides leaders of Tamil groups and several from Sri Lanka.