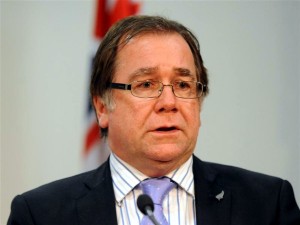 New Zealand Foreign Minister Murray McCully called on Sri Lankan President Mahinda Rajapaksa this evening at Temple Trees. During the discussion, McCully reaffirmed his countryâ€™s support for the Commonwealth Heads of Government Meeting (CHOGM) that will take place in Sri Lanka in November.

Minister McCully wished Sri Lanka well in preparing for CHOGM and said the entire Commonwealth needs to see the progress in the country, pointing out that success in trade and the economy is important to the process.

Rajapaksa and McCully also spoke about several other areas of mutual interest including agriculture, tourism and education.

New Zealand expressed interest in supporting model farms in Sri Lanka as well as increasing tourism between both countries. In the education sector, New Zealand hopes to increase scholarships for tertiary education across the board, particularly in the field of agricultural, and the Foreign Minister said this includes more Commonwealth scholarships as well.