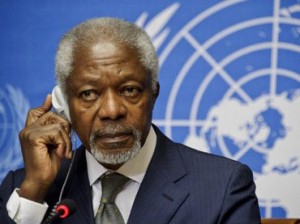 Kofi Annan, former secretary-general of the United Nations In an abrupt move,, has resigned his position as head of a UN Security Council peace-making mission to Syria, according to world press reports.

â€˜The increasing militarization on the ground [in Syria] and the clear lack of unity in the Security Council have fundamentally changed the circumstances for the effective exercise of my role,â€ Mr. Annan said, in a statement on Thursday(2).
He blamed international leaders for not accepting responsibility to act.

â€˜At a time when we need â€“ when the Syrian people desperately need â€“ action, there continues to be finger-pointing and name-calling in the Security Council.â€™Mr Anan said

Countries such as Russia, China and Iran must do more to persuade the regime of Mr. al-Assad to end the conflict and to step down, Mr. Annan said emphatically. And countries such as Saudi Arabia, Qatar, Turkey and the United States must do more than simply root for the opposition to triumph, he said.