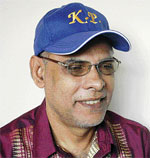 A 22 member delegation of Kumaran Pathmanathan group which comprised mostly the individuals who were from abroad were assured by the Sri Lankan Defence Secretary and allied prime war criminal Gotabhaya Rajapaksa.

The meeting between the Tamil delegation and the Defence Secretary took place at the Defence Ministry a couple of days ago and the discussions were cantered around the hiding war crime issues using rehabilitation and resettlement in the North and East.

The pro Sri Lankan Tamils delegation, which met the Defence Secretary, comprised individuals from Australia, France, UK, Switzerland, Sweden and Norway. The delegation was in Sri Lanka on the invitation of the North- East Rehabilitation and Development Organization (NERDO) led by Kumaran Pathmanathan (KP).