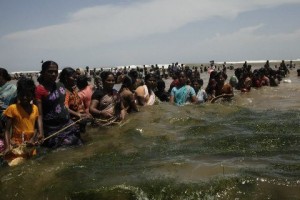 Hundreds of people from Tamil Naduâ€™s Idinthakarai village, the epicentre of the protests against the Kudankulam Nuclear Power Plant (KNPP), walked into the sea Thursday to give expression to their anger at moves to load uranium fuel in one of the two reactors. Buffeted by the waves, the villagers say they will carry out their â€˜jal satyagrahaâ€™, peaceful water protest, till 6 p.m. â€œWe will stay in the sea, we will protest against the loading of uranium fuel in one of the reactors. No one can stop us from protesting,â€ said Immaculate, one among the many agitators standing in waist-deep sea water. Forming a human chain in the sea, the villagers from around the Kudankulam nuclear plant followed a similar â€˜jal satyagrahaâ€™ in Madhya Pradesh against the Omkareshwar Dam on the Narmada. On Wednesday, protestors ended their 48-hour relay fast in Idinthakarai village in Tirunelveli district to protest police use of teargas shells and batons to disperse crowds and the constabulary conducting house-to-house searches. Villagers under the Peopleâ€™s Movement Against Nuclear Energy (PMANE) banner have opposed the project for the past one year, fearing for their safety, especially since the nuclear disaster at Fukushima in Japan March 2011.  ]]>