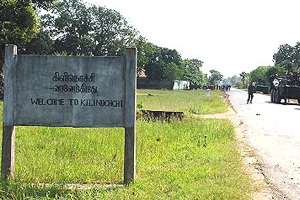 The lands which are in the care of the relations are grabbed by some who are in support of state ruling sector parties have augmented. Relations maintaining the lands and threatened is according to sources.
Similar two incidents have occurred recently at Kilinochchi Thondaman nagar village and Jayanthi nagar.
Other than this, the lands belonging to Irrigation department which are either side of the two main irrigation canals which flows water from Kilinochchi,Â  Iranaimadu tank toÂ  Uruthirapuram, are impounded by those belong to political parties. Currently business centers are operating in these localities.
The land allocated for Rathinapuram waste water drains are also confiscated. Such land confiscation incidents are augmented in Kilinochchi which is able to observe.]]>